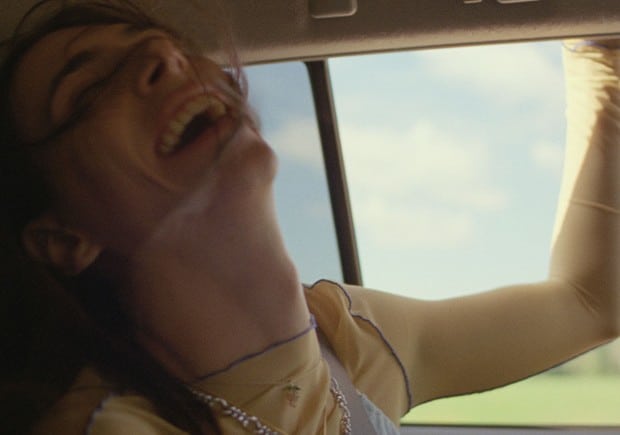 This first feature for writer/director Luis de Filippis is an exercise in style. A short family holiday is (mis)used by parents and two sisters to behave badly – not in an outrageous way, but just enough to be really irritating throughout its running time.

Renata (Madonia), a writer in her early twenties is on holiday with a teenage sister Siena (Evans) and overbearing parents Mona (Milano) and Guido (Parro). Left at home is brother Anthony, who, like his sisters, is a victim of a passive-aggressive mother who tries to control everything from table manners to mobile phones. Mostly without success.

Ren, a trans woman, also has a secret to hide and one that will make her increasingly dependent on the family. Siena (Evans) wants to leave the nest and spends the nights cruising. Ren has an affectionate relationship with her father, who suffers mostly in silence – even during a farcical birthday party which brings out the worst in him. But most annoying of all is Mona’s forced happiness: the girl is always breaking into song and dance, hoping the rest of the family will join her. There is one rather moving scene where some kids on the beach take Ren’s doll, teasing her about her looks, and then destroying the toy – only for Guido to repair it for his grateful daughter.

The late Jean-Luc Godard postulated that style is everything and certainly de Filippis stringently adheres to a unity of aesthetics in a script entirely consisting of smalltalk and petty arguments. Everybody seems emotionally and intellectually regressed – the real arguments are buried too deep to be solved.

DoP Norm Li underlines the one note narrative with pastels colours and languid close-ups. We wait for something cruel to happen (like in early Bruno Dumont features), but de Filippis simply wants to emphasise that Ren is just one of the crowd, and certainly succeeds in gaining some admiration for creating another “Neighbours’ on sea. Not for everyone, but one has to admire de Filippis’ absolute adherence to the principle of unbroken exasperation. AS