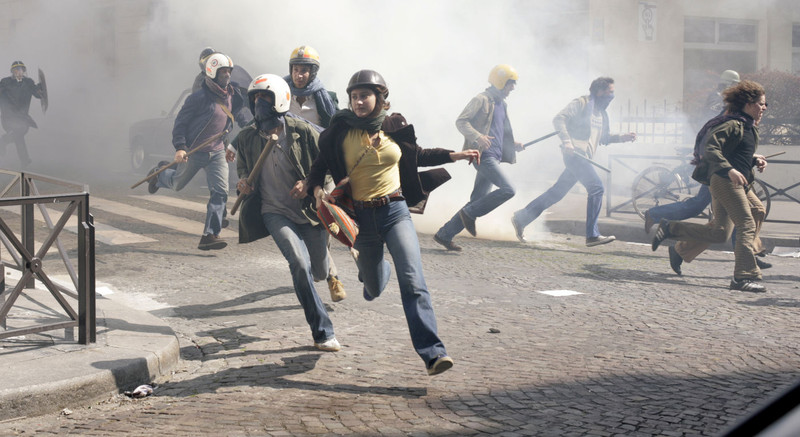 In March of 1968, there was a near-revolution, sparked by events at Nanterre University, leading to ten million workers shutting Paris down, in solidarity with the students.  Olivier Assayas’ hugely accomplished film takes place in 1971, with the pungent tear gas of revolution still lingering in the air, the Sixties having opened a lid that wasn’t going to be put back on and anything felt possible.

Newcomer Clement Metayer plays artist Gilles, son of the middle classes, in love with the unattainable Christine and dedicated to The Fight. On one such night, a student is partially blinded by a brutal Police Force, intent on crushing any resistance. The image of his blooded face becomes an iconic symbol of the struggle for humanity and justice and the stakes and impact on the activists’ lives escalate accordingly.

Assayas’ semi-autobiographical feature won two awards at the Venice Film Festival, including Best Screenplay and it is indeed a beautiful, freewheeling, open, energetic piece, that effortlessly captures the essence of being young, pumped with the exuberance of life, when issues were black and white and immortality, or at least, lack of anny consequences that mattered, was the reality.

However, these revolutionary times prove to be only the picaresque backdrop. The real story is essentially one of growing up, of passion and of unrequited love. That the decisions we make when we are sometimes too young to make the correct ones can prove very bitter and of course in some cases, terminal.

The soundtrack is select and seamlessly woven into the storytelling rather than simply plastered on to create the period and the film is expertly lensed and lit by award-winning DoP Eric Gautier (Into The Wild, The Motorcycle Diaries).

It is also a bastion of independent filmmaking. It resolutely refuses to adhere to the standard, hackneyed rules of film storytelling, going off on its own lyrical riff in the spirit of the Artist and is all the richer for it. What it lacks in directly recognisable plot, it more than makes up for with subtlety, vibrancy and introspection. AT