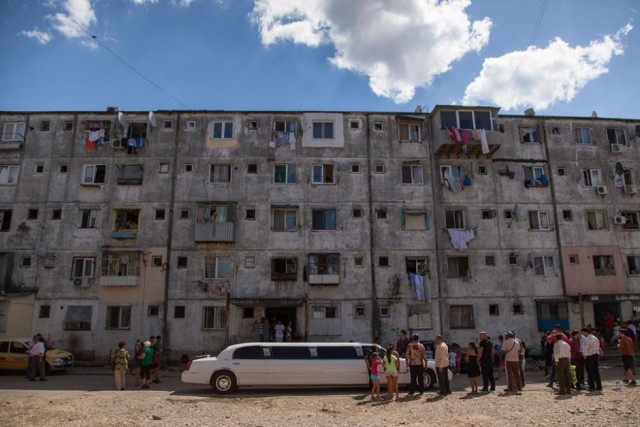 Ivana Mladenovic daring screen debut has an emotional directness which stuns and captivates throughout its two hour running time. Based on Adrian Schiop’s novel about a gay amour fou in one of the roughest suburbs of Bucharest, it combines gay and gypsy issues in a country not known for its tolerance towards minorities.

Schiop also stars as Adi, a shy introvert in his early forties, who is writing a PHD thesis on manele, the popular gypsy music. Adi has no idea that the Ferentari musicians are often exploited by the local mafia, who treat them like slaves. When Adi meets Borcan (Marin), one of the small time Mafiosi, he is introduced to his ‘servant’ Alberto ‘Berti’ (Pavel), a gypsy, who is about Adi’s age, and has spent more than half of his life in jail. Berti soon moves in with Adi, who shares a flat with his translator friend Vasi (Grumarescu) and his girl friend. Being rather naïve, Adi doesn’t appreciate that the couple find the rather rough ex-con difficult to deal and they soon move out, leaving Adi “to his hobos homos”.

Adi has to pay all the rent, and his financial pressure is compounded by Berti’s rampant slot machine habit. Whilst Adi tries to work for non-profit organisations to make up for Berti’s losses, his lover becomes increasingly need y and demanding, wanting permanent attention, and developing psychosomatic issues for Adi to deal with. But Adi enjoys the constant emotional neediness – it makes him feel important and after being dumped by his previous relationship. Before long though the two come to blows. Adi throwing Berti out of the flat, but then welcoming him back. Clearly he has become obsessed by him and needs to decide whether to end the relationship or continue with the toxic terror.

DoP Luchian Ciobanu has filmed the Soldiers on intimate close-up with a handheld camera creating a claustrophobia that feels convincing and real, capturing the confines of the small apartment. But even when the pair go out and about the camera follows them slavishly, showing how co-dependent their partnership really is. The poverty is grim, the streets lined with hovels which are sometimes ruthlessly removed by bulldozers. There is no political message here, Mladenovic’s fly on the wall treatment of this lost souls affair is shown relentlessly and passionately with no holds barred. Soldiers is an emotional rollercoaster, authentically performed and confidently directed. Mladenovic shows great promise for the future. AS