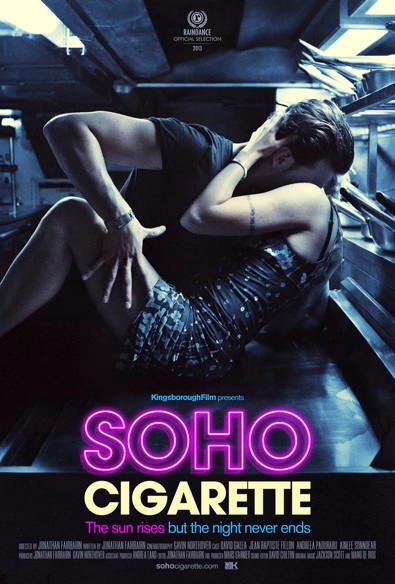 D, a young Italian, shows tourists around Soho telling them vivid stories about Henry VIII having sex with Anne Boleyn at “this very spot”. He loses his job and girl friend Anastasia, a bar maid specialising in nicking bags. After a mysterious stranger gives him an old Mercedes, D talks to the woman who died in the backseat, sleeps in hotel kitchens and in the flat of his friend Luc, who runs off with Anastasia.

At first, the b/w photography gives hope that at least the aesthetics may save the film, but soon even the pictures becomes insipid and repetitive. The film is simply as unexciting as its main protagonists: lots of talk about nothing, pretending to be cool, but actually being boring. Everyone wanders aimlessly through the film with its unstructured ‘narrative’ and if there would be a cliché counter, it would have given up the ghost after thirty minutes. Sunglasses at night were original a very long time ago, and the actors are pretentious wannabes playing themselves. Even the score is gratingly second hand.

SOHO CIGARETTE is low on budget, but even lower on ideas, succeeding only in making Soho look uninspiring. AS