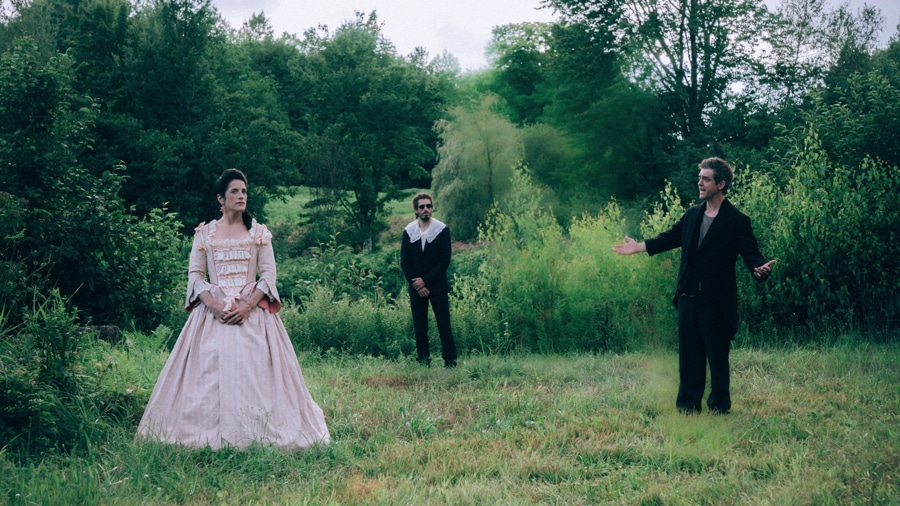 Singular, original and always refreshing Canadian auteur Denis Cote continues to push cinematic boundaries with a body of work that avoids convention in its freedom of expression.

His latest film – screening in this year’s Berlinale Encounters section – is another curio that defies categorisation, it is certainly highly individual it its style. In a bid to fly in the face of Covid restrictions the film is appropriately set in the wide sweeping landscapes of Cote’s verdant homeland of Canada, this beautiful bucolic setting very much playing a leading role of its own.

Dressed up as a filmed play, the characters pronounce their lines at the top of their voices competing with ambient birdsong in the forest setting, and the dialogue itself is delivered like a piece of 17th century French theatre – in the sonorous style of Racine or Molière – it could almost be Le Misanthrope (with Antonin being the philander Philinte), its characters each representing a distinct point of view. Some members of the cast wear period costume, but not always. Essentially a series of long shots like scenes in a play are broken by an interlude where a young man walks aimlessness across the screen, ‘the play’ then continues its story about a hapless loser Antonin (Gaudette) who looks to his female friends and consorts for guidance and savvy advice.

His sister Solveig (Corriveau) wears modern dress most of the time, whereas Antonin’s ex-wife Eglantine (Rompre) is dressed in period garb. And although the play is delivered in a 17th – or even early 18th – century style the content is very much contempo with its social media allusions and references to the present day.

Eglantine, it turns out, is now involved with another man, but flirts with Antonin suggesting she is opens to rekindling their relationship, on condition that he mends his ways. Meanwhile Antonin still carries a candle for another love, in the shape of Cassiopee (Duranceau), although she has apparently moved on to pastures new. Various other characters highlight Antonin’s crimes and misdemeanours: Rose (Fortin) claims he has not paid his taxes and Aurore (Loiselle), that he has stolen from her car.

Social Hygiene will certainly be remembered as a film made during the time of Covid. But what this comedy of manners is satirising is open for interpretation. MT

BERLINALE FILM FESTIVAL 2021| Best Director Ex-AEQUO with The Girl and the Spider.