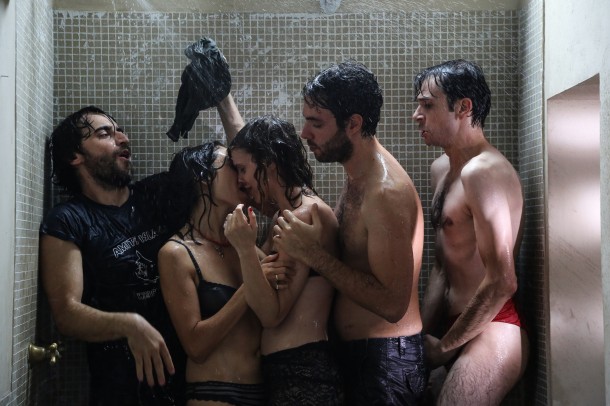 Roan Johnson follows his first film, The First on the List, with SO FAR, SO GOOD, another outwardly enjoyable but ultimately empty film.

In Pisa, five flatmates are facing up to the end of their lives as students with varying degrees of success – or failure, as the case may be. Ilaria (D’Amico) is pregnant by a married man who has not returned to his wife but to a new mistress.  Instead of writing her PHD thesis, she will have to return to her very traditional parents in a small town. Vicenzo (Vasallo), the only scientist in the household, has landed a job at Rejkavik university. His girlfriend Francesca (Bartolini) is a theatre student and actor like the rest of the group and doesn’t want to go with him and be jobless in Iceland. Cioni (Cioni), the odd man out and least selfish of the flatmates, offers to live with Ilaria and adopt her baby, in desperation. But over this whole story hangs the ghost of their flatmate Michele, who killed himself in a staged car accident a year ago. Andrea (Favilla), was going to follow Michele’s brother Marco to Nepal – until he bumps into his ex-girl friend Marta (Ragonese), an established TV actress, at the farewell party. So, the quintet is left at sea in a motorboat, without any gas in the tank.

SO FAR, SO GOOD suffers from the fact that Johnson can never make up his mind if he wants to direct a rather silly comedy or something more substantial. His protagonists are a selfish bunch and not very endearing. The men don’t even try to hide their rank machismo. The women blame the men for everything, whilst having a tendency to indulge in self-pity. All this would work with a much more serious approach, but Johnson takes a much more light-hearted look at their ups and downs, which are admittedly funny but detract from the underlying problems of the group. Instead of showing five people in search of an identity, SO FAR, SO GOOD is just another comedy about a group of young people who don’t know how to grow up. A  shame then, since the ensemble acting is brilliant and the fresh and lively camerawork shows Pisa from an interesting and novel perspective. An opportunity missed. AS

CINEMA MADE IN ITALY RUNS FROM 5-9 MARCH 2015. FULL PROGRAMME HERE