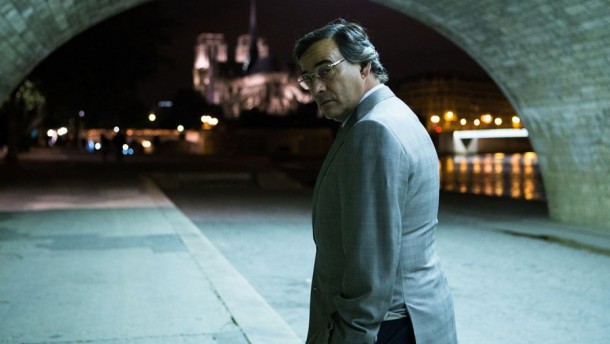 SMOKE AND MIRRORS often feels like a parody of classic international spy thrillers with its constant wanderings from world capital to capital taking in the sights of Paris, Madrid, London, Singapore and Geneva to mention a few. But despite Alex Catalan’s impressive visual wizardry and intense performances from leads Jose Coronado and Eduard Fernandez, the film leaves us feeling increasingly detached from its often complex narrative which fails on characterisation in an attempt to concertina the detailed meanderings that play out before our eyes in a slick docudrama format that smoulders enticingly but never really catches fire and eventually outstays its welcome,

The thriller explores the intriguing adventures of Paesa who was interviewed by Cerdan after faking his own death in 1998 after fleeing Spain and his loveless marriage to Gloria (Mireia Portas) during the 1980s . Paesa was never paid for his efforts to secure government defence against the Basque terror faction ETA and wreaked revenge on the authorities by helping arch criminal Police Head Luis Roldan (Carlos Santos) to launder his ill-gotten gains squirrelled from the public purse. But Roldan fails to pull off his plan, ending up in hiding in a squalid Parisian mansard – the ones with the tiny oval windows. Reports of his disappearance throng international news channels and impressively Rodriquez has garnered footage of BBC 80s News Reports to give these scenes added authenticity. Where he falls down is in making the story feel too episodic and eventually rather tedious as it flits around trying to cover the whole truth in an exhausting saga that goes on for 135 minutes and ultimately feels repetitive.

That said, Fernandez makes for a sleazy and convincing antihero who manages to be all things to all men, and women, for that matter, with his reptilian gaze and glib excuses. As Roldan, Santos is less successful, rocking an ill-advised bald pate that makes him look weirdly inhuman, it’s difficult for us to take his character seriously and detracts from his performance. His wife Nieves (Marta Etura) remains largely a cypher in an underwritten role. The most compelling performance comes from Paesa’s sidekick Jesus Camoes (Jose Coronado), who is both devilish and appealing in this watchable but unsatisfactory Spanish spy caper. MT