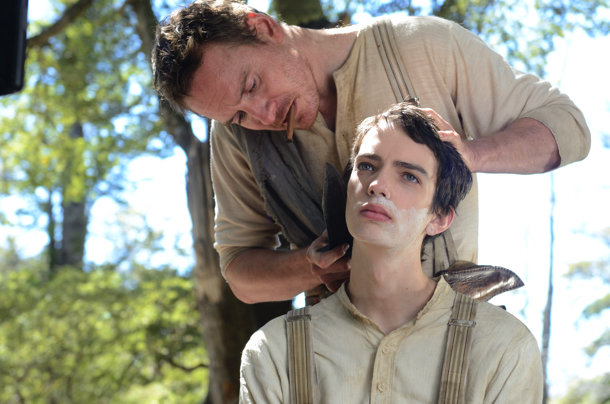 Winner of the Grand Jury Prize in the dramatic category at this year’s Sundance Festival, Slow West marks the feature debut of director John Maclean (late of the Scottish rock group The Beat Band) and marks the latest outdoor film to exploit the recently discovered scenic possibilities of New Zealand. Set in Colorado in 1870, Slow West at first seems to be shaping up as yet another grimly realistic depiction of the Old West – an amateurish attempt at a store hold-up has particularly harrowing consequences – peopled by unpleasant characters all looking after Number One. Adrift in all this is fresh-faced innocent Jay Cavendish (Kodi Smit-McPhee) newly arrived from Scotland in search of a girl (Caren Pistorious) who has fled her former homeland with a price on her head. His quest crosses the path of cynical bounty hunter Silas Selleck (Michael Fassbender), who also serves as the film’s narrator.

At the point where fellow bounty hunter Ben Mendelsohn emerges from the undergrowth bearing a bottle of absinthe and two drinking goblets like Trapper John with his jar of olives in MASH, the mood shifts to something decidedly more eccentric. It becomes difficult to figure out if what Jay is now witnessing is actually happening or if his imagination (as in Donnie Darko or A Beautiful Mind) is taking over, fuelled by the absinthe. The film’s depiction of violent death becomes progressively more light-hearted, culminating in a spectacular and cartoonish spaghetti western-style shoot-out (would all those guns really have functioned so efficiently to such lethal effect in 1870?) centring on a small shack set in a vast valley that provides a backdrop that is imposing even by the expected standards of the modern western. Richard Chatten