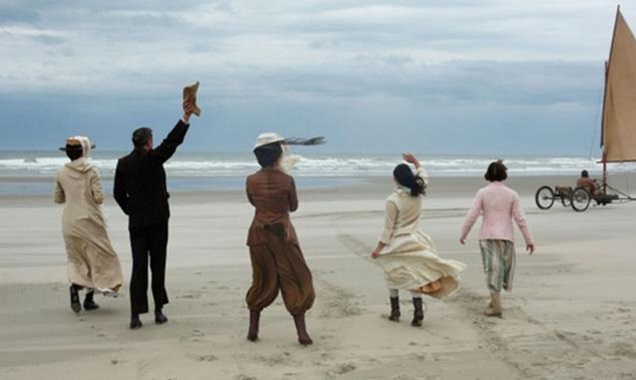 After success with P’tit Quinquin, Bruno Dumont is back with comedy of a different kind, an absurdist often grotesque turn of the 20th century melodrama which combines moments of poetic realism and is certain to divide audiences with its quirky brand of charm.

On a swampy coastal stretch of Britany a rotund police inspector (Cyril Rigaux) is investigating a spate of ‘mysterious’ disappearances possibly connected to a carnivorous local fisherman and his family of four kids, the eldest of whom is the titular Ma Loute (Brandon Lavieville). The arrival of the Van Peteghem family from Tourcoing signals the start of the summer holidays as the mannered aristrocratic family gain their family seat – a strangely 1930s style cement contruction called The Tymphonium – amid cries of euphoria over every aspect of local nature and particularly the splendid views. They are soon joined by Andre’s cousin Aude (a gloriously over the top Juliette Binoche), her cross-dressing son Billie (Raph) and her cousin or possibly second cousin as they seem to be an interbred  lot – apparently quite common amongst the ‘grand old families of Northern France’ –  which would explain the weird paternity that later emerges in the final scenes.

This is a charismatic and inventive curio of a film which will either delight you with its quirky humour and performances or send you home underwhelmed. The humour is very French and the best part is undeniably Guillaume Deffontaines’ perfect lensing and the magnificent seascapes which echo and re-create the lush vibrancy of those of Manet, Monet and Cezanne. Costume-wise too this is a sumptuous affair with perfect attention to detail both in the domestic settings on the resplendent beaches making this a visual feast not to be missed. Performances too are really outstanding. Fabrice Luchini ponces about with a contorted limp; Juliette Binoche faints and swoons with delight and horror and Valeria Bruni-Tedeschi is simply graceful and restrained with an expression of discrete ecstacy that often dissolves in tender tears. It would be a shame to spoil the entire plot which reveals itself with delicous coyness. Suffice to say, there’s no director like Dumont for creating such a fabulous stillness and sense of place in his glowing compositions of the Brittany scenery and his deftness for combining period touches with elegant framing and a sense of magic and delicate poetry even in the more mordid aspects of this inspired comedy drama. MT