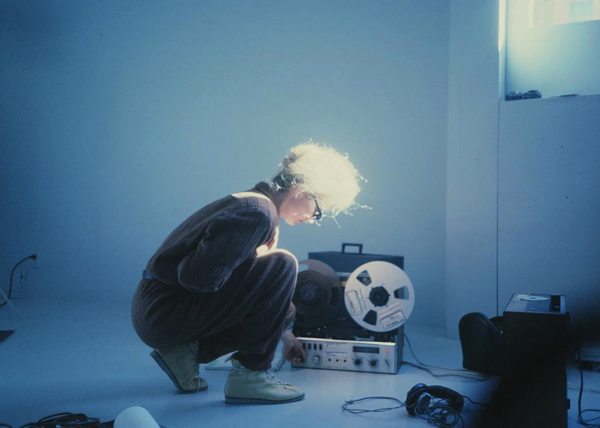 Paris based writer/director Lisa Rovner looks at the women pioneers behind electronic music in a lively new documentary. Sisters With Transistors shows how women opened up new avenues of creativity, despite prevailing male attitudes at the time  to these talented musicians having to wait a lifetime to hear their own compositions on the airwaves.

The honour of being first goes to Lithuanian born Clara Rockmore (1911-1998). Trained as a violinist at the conservatoire, she then took up an early synthesiser style instrument. We watch her in the garden of her New York house in 1934, with the sound artist Aura Satz commenting how Rockmore describes her art  allowing “the self-created sound to change the music”.

British composer Delia Derbyshire (1937-2001) was also an early pioneer working in the BBC’s Radiophonic workshop, surrounded by electronic generators, producing music via a TV monitor, culminating in a structural version of ‘white noise’. In her own living room she worked with huge radios, up to two meters high. At Oxford, she was part of just ten percent of female students. The Nazi bombing of Coventry, and the London Blitz, inspired her to a new world of sounds. Equally, the CND marches inspired her to compose music “from the Cold War”. But her greatest and most lasting achievement is the eerie, a-tonal intro-music for Dr. Who, a series starting in 1963.

Daphne Oram (1925-2003), co-founder of the BBC Radiophonic Workshop, composed prolifically: Amphitryon 1958, Private Dreams and Public Places – both pieces evoking Huxley’s SciFi novels. Oram worked with paint on the glass plates, which distributed the music onto the tape recorder. Her Birds of Parallax is a sort of dance music and shown with a newsreel film clip of ‘modern’ dancing’.

Eliane Radigue (*1932) grew up near Nice airport, her music was based on the very different sounds the planes made. She created a sound stage, which became a musical universe. Working as an assistant to composer Pierre Schaeffer in an otherwise male-only crew, she was told by a co-worker “How nice it is, to have you in the studio, it smells good”. At the end of the 60s when working with Pierre Henry, Radigue discovered the feedback technique, by “finding the sweet spot between a speaker and a microphone, making the sound evolve.” She called it “Sonic propositions”.

Meanwhile, in 1952, in New York’s Greenwich Village, electronic composers Bebe Baron (1926-2008) and her husband Louis wrote the music to Belle of Atlantis by Ian Hugo and Anias Nin. In 1956 they composed the soundtrack to Forbidden Planet, but the musicians union fought successful against a credit on the feature – they had to be happy with being mentioned as “Electronic tonalities” contributors.

Pauline Oliveros (193-2016) was a lesbian, a revolutionary and a composer of electronic music in 1950s San Francisco which was, at the time, nearly as conservative as the rest of USA. But, it was also a time, when some artists wanted to be not like anybody else. Having been given a tape recorder for her birthday in 1965, Pauline went on to make a career as a composer, starting with’ Bye, bye Butterfly’, a Japanese influenced ballet. Many composers had in common “They they were ghost riding on different frequencies”, as Mayanne Amacher put it.

All these women had to fight simply to stay alive, Wendy Carlos (*1939) is the exception. Invited by a very young David Letterman to appear on his show, she amazed him with her music producing equipment that saw her becoming arguably the first woman to secure lucrative commercials, and a staring role in Hollywood production of The Incredible Shrinking woman“.

Rovner returns to Eliane Radiguet, who was interviewed in 2018 in Paris, listening to some of her music for the first time. “Thirty, forty years ago, it would have been impossible for musicians to play my music. I am hearing it for the first time. In the past, if often thought, I was crazy”.

In her impressive debut, Rovner wisely avoids the talking heads approach that can often spoil the integrity of a documentary, interweaving her film instead with informative historical newsreels and fascinating archive footage. AS