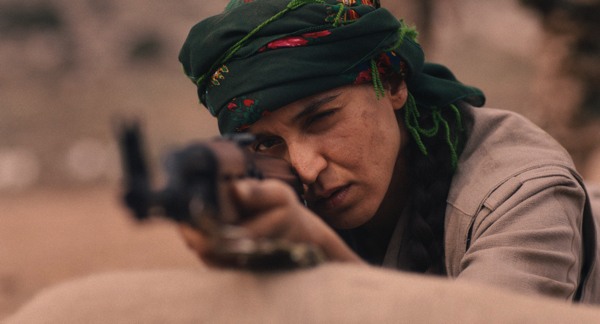 A woman is torn between her Kurdish roots and her German identity as a Bundeswehr soldier in this compelling drama from Greek born director Daphne Charizani whose script makes this exciting drama a real winner: the characters are well-fleshed out in a story that is fresh and inventive with surprising twists and turns.

We first meet the main character Rojda (Bargriacik) entering a camp for displaced Kurds where she attempts to get her mother Ferhat released into her custody. Her German passport finally overcomes the camp’s administrators suspicions, and the mother and daughter return home to Cologne. But Ferhat is anything but grateful, she longs for her daughter Dilan (Krebsfänger), who is fighting in a Kurdish battalion of women soldiers against ISIS. Despite safe sanctuary in Germany, Ferhat would much rather be back in her homeland and supports the local Kurdish leader, who sells forms for visa applications, even though they are all free to move around.

Rojda is a soldier in the Bundeswehr, the German army, and in this capacity she is sent off to support Kurdish fighters on the ground, acting as an interpreter. With the help of Staff Sergeant Alex Breitmeyer (Letkowski), who has crush on her, she gets brownie point and a great of freedom when working with the Kurdish women, who, to the astonishment of the German soldiers, refuse to have a leader. Nevertheless, Rojda strikes up a friendship Berivan (Bulut) who eventually leads her to Dilan. But their re-union is short-lived.

Charizani avoids type-casting in conveying the psychological vulnerability of these women fighters; fear is always the dominant factor despite their intense training. A fiercely fought football match brings some relief in the highly charged atmosphere for the male soldiers. But the women are not amused by these antics, and Rojda tells Breitmeyer: “I haven’t come here to play football”. Although this is a film about war, the battlefield is inventively filmed in intense close-ups, avoiding the usual widescreen set pieces. DoP Falko Lachmund films in intensive close-ups putting the individual at the forefront rather than the usual massed male mayhem. Bargriacik’s Rodja is a study in dispossession, whatever the outcome of the mission, she has so much to lose. There is nothing superfluous, everything plays with the utmost efficiency. Shot on a small budget and none the worse for it, Sisters Apart is a strong example of how clear-sighted ideas trump  production design. AS