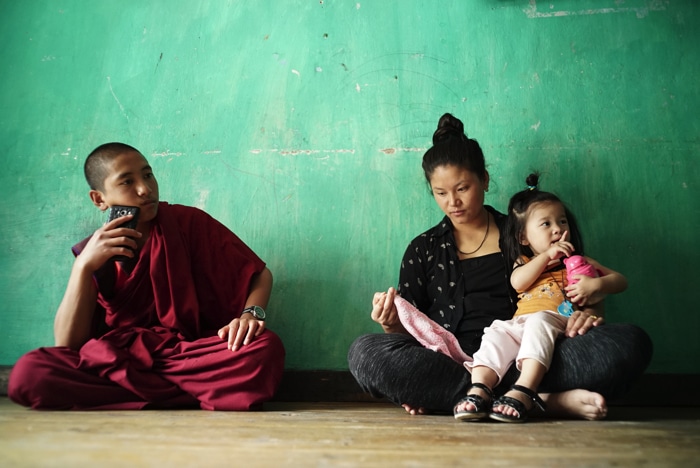 In a follow-up to an earlier documentary, French director Thomas Balmes returns to a village in Bhutan to explore the impact of modern technology on a once-sheltered society.

Ten years ago French director/DoP/producer Thomas Balmès had visited the remote village of Laya at the foot of the Himalayas. Electricity was coming to the village, and everyone was excited, including eight-year old Peyangki, a monk, who became the star of Happiness. Ten years later, Balmès returned to Laya for Sing Me a Song, probing what TV and internet had done to the village, and Peyangki in particular.

We start with footage from Happiness, with Peyangki frolicking in the fields and looking forward to the electrification of the village but, at the same time, being adamant it would not interfere with his religious study in the monastery. We cut to the classroom of today and see all the monks, including Peyangki, emerged in prayers – but when the camera pans out again they are all stuck into their mobiles, the chanting just enough to cover the din of the devices.

Peyangki, who has now found an admirer in Pemba Dorji, a young monk about the same age as Peyangki was in Happiness, is “moving away from Buddha”. Like his fellow monks he is sold on the internet, particularly WeChat, which opens their world to female companionship. When visiting the local market, the young men find a basket with plastic weapons and start a hilarious war game, with firecrackers replacing life ammunition.

Sadly neither Peyangki’s teacher, not his mother can stop the young man from leaving the monastery for the capital Thimpu where his ‘girlfriend’ Ugyen Pelden is pictured singing with three other young females in a bar. Peyangki has made enough money by selling medical mushrooms (which he has harvested with his sister) to start a new life with Ugyen, who – unknown to the monk – already has a baby daughter from a previous marriage, and plans to emigrate to Kuwait, leaving her daughter behind.

Peyangki is taken back by all this, and Pemba, who has been sent by his teacher to convince his older friend to return to the monastery, is forced to return home alone. Peyangki is consoled by one of the other singers who fills him with positive thoughts, but for Peyangki the world has come to an end

The message of this delightfully poignant coming of age story is clear: devices which help us to connect, can easily tear us apart and destroy our sense of self and alter our identity. Peyangki feels obligated to join modern and his nativity leaves him unprepared for the Pandora’s box, and is unable to rediscover his innocence. The reaction of his fellow monks, their easy way of dealing with consumer goods as well as armed conflicts, show the regressive nature of the online world, where everything is levelled out to mean more or less nothing. For Peyangki, who had once been called the “re-incarnation of a Lama”, the choice is clear: the safety of isolation or the unstructured life of an empty gratification in a world where everything is replaceable at a moments notice, including the people closest to you.

Happiness won a cinematography award at Sundance. The results of this return odyssey are less positive although equally beautiful in their visual allure, the immaculate scenes in the monastery contrasting starkly with the hustle and bustle of the  urban environment. The film won the Grand Jury Prize at this year’s One World International Human Rights Doc Film Festival. AS