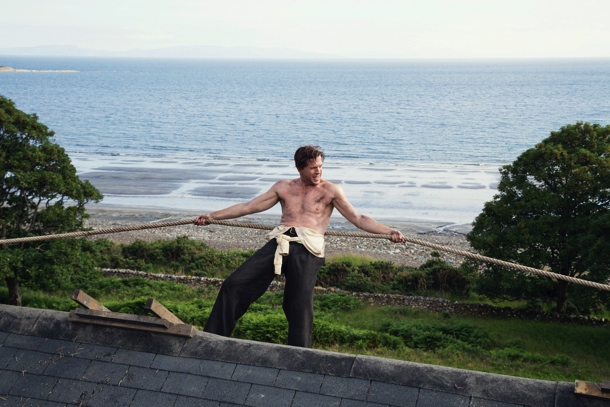 Damian Lewis is the driving force in Corinna McFarlane’s debut drama exquisitely set on a picturesque Scottish island during the 1930s. With a second world war looming, the local community is leaving the island to move to the mainland and the delights of Glasgow’s Willow tearooms amongst others. Hardly surprising, also, when their much revered pastor is a raving lunatic with unscrupulous Victorian morals and a mercurial temper to boot. Preaching in the local ‘kirk’ with his jet black robes and flaring eyes, Lewis evokes a devilish Dracula figure with the best Scottish accent since Dr Snoddy hit the airwaves in Dr Finlay’s casebook. Clearly, he is a force to be reckoned with and another example of religious fervour masking more deep-seated mental issues. The film opens with his wife, Aislin (Andrea Riseborough) writhing in childbirth: the consequent death of this child, his first born, further erodes his ability to engage with parishioners in a sympathetic and supportive way: his confessional style is one of ‘fire and brimstone’ rather than ‘care in the community’. As a husband, Balor is harsh, truculent and unloving.

In contrast Riseborough’s Aislin is gentleness personified, but with no child or work to keep her occupied she feels rather underwritten as the Vicar’s wife. Until, that is, the arrival of a young delinquent (Ross Anderson) who is delivered to their care and guidance from a local remand home. From the moment he sets foot in the remote Vicarage on the edge of the cliffs, Aislin has one thing on her mind. Andrea Risborough brings a delicate subtlety to her performance and, although she sounds more French than Scottish in some of the scenes, her soft submissiveness is tempered with a new hope radiating and a luminous serenity that transform her completely. Sadly, Ross Anderson makes for neither a believable rogue nor a simmering love interest as the bad boy looking for redemption. Clearly a deep and thoughtful thinker who has suffered a misguided past and enjoys literature; with his tousled curls and soft features, he is more cherubic that Byronic. For this love triangle to really succeed dramatically, the part clearly needed a brooding Colin Farrell type who could add ballast to Damian Lewis’ pugnacious fury as Balor, but the budget had been spent on the others. When Balor leaves for the mainland with a mission to transfer the kirch, the young pair grow closer, as Aislin feels his supportive presence. They are pictured frolicking in the local woods in an ill-advised vignette that is neither convincing nor well-staged with garishly bright lensing making the forest glow a sickly incandescent green. However, Aislin and the lad are clearly enjoying themselves and there is hell to pay in a predictable denouement when Balor finally hits the croft on his return.

Silent Storm is a visually ravishing affair that makes wonderful use of its lush island setting with Ed Rutherford’s superb camerawork. It works best dramatically in the scenes where Damian Lewis’s Balor injects his ebullient, masculine presence: strutting around the island as the bitter and frustrated priest, he is vehemence personified and makes this otherwise tepid story worthy of a watch. MT