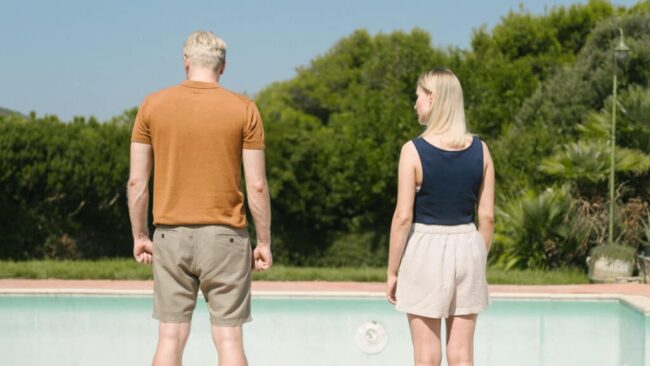 Polish filmmakers certainly know how to be provocative and push the boundaries where love and sex are concerned and Silent Land excels in ramping up the tension in this subversive and acutely piquant two hander.

A cleverly written script and choice visuals keep us engaged with an all too familiar holiday scenario, primped with surprising twists and turns that are enough to derail the most loved-up up romantic break. And what initially feels like an ideal marriage soon shows cracks that run deeper than those in the dirty and disused swimming pool that awaits them in their dream villa.

Confronted by builders who can’t speak English – or Polish for that matter (Adam and black are from – they head for the idyllic beach for some rest and relaxation. On their return the pool has been repainted but it still lacks the requisite water, and a serious accident poolside involving the immigrant builder then deep-sixes any chance of a late afternoon swim, Soon the owner and the paramedics arrive, as the two holidaymakers give evidence in the ensuing police investigation, a dark vein of humour creeping into the narrative ‘lost in translation style’ when the carabinieri also turn up, and clearly don’t speak much English.

The compliant Poles are only too delighted to accompany the police to the station to help with inquiries, their holiday clearly heading into a disaster zone for no fault of their own, as a kaftesque scenario develops, the detective leading the inquiry picks apart their statement and asks them to return for further questioning. The tables a gradually turned as the justifiably disgruntled clients soon become unwitting suspects in an accidental death inquiry.

There are certainly touches of Michael Haneke’s observational storytelling in the precise framing as the voyeuristic camerawork tracks the couple in silent contemplation or sharing a private joke. The Colombo style police procedural has a understandably unsettling and de-stabilising affect on the couples’ sense of integrity and tranquility as they start to question their own response to the tragedy as foreigners in a unfamiliar environment increasingly coming under the xenophobic spotlight of a tightly knit community far away from home. Tense and highly intelligent filmmaking. MT