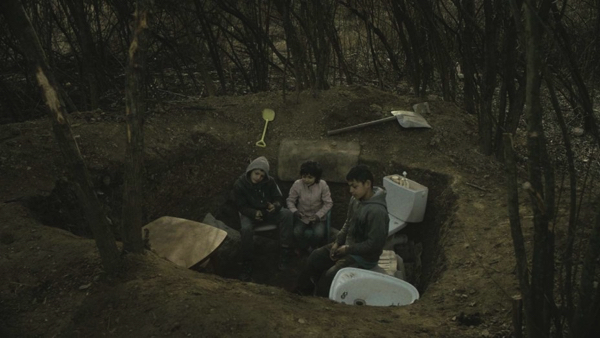 Award-winning director-writer-producer: Pavol Pekarcik, brings a sense of compelling wonder to this social realist ‘mockumentary’ that proves truth stranger than fiction, even when you dress it up a little, as he does here with his artful cameraman. Unfurling in a series of long static unedited takes Silent Lives blurrs the boundary between fact and fiction, reflecting with stark acuity the self-regulating lives of four struggling Roma gypsy families, affected by impaired hearing.

The Roma community have always maintained their exclusivity, living on the margins of society and fiercely protecting their identity and often physically or mentally challenged members. According to records, some of them do not even exist despite efforts from Amnesty International and the United Nations.

First we meet Sandra (Sandra Sivakova), a football mad 14-year-old girl with a passion for Ronaldinho. Her parents clearly care for her welfare but complain about still sharing a bed with her.  So they plan to marry her off to an older but decent-looking man from their community who is accepting of her challenges: “I don’t mind deaf”. He says nonchalantly. Sparse on dialog these sepia-tinted or vibrantly coloured vignettes are expertly framed and could each serve as shapshots in an ethnographical photo exhibition, their tragic narrative intensity contrasting with a strange beauty.

The film becomes cumulatively more bizarre with the subsequent family snapshots veering towards surreal horror in picturing these impoverished and impaired protagonists getting by day to day in squalid conditions. In the next story, tiny teenage Marian (Marian Hlava) is hooked on Jean-Claude Van Damme and martial arts. Clearly this is a worry to his mother who spends her time cooking and washing clothes in a nearby stream, road signage serving as a washing line. Then there is mute and chain-smoking Alena (Alena Cervenakova) and her equally challenged boyfriend Rene (Rene Cervenak). Their only goal is pregnancy and marriage. They seem accepting of their situation and just want to look after each other and their new baby.

The final segment sees Roman (Roman Balog), Kristian (Kristian Balog) and Karmen (Karmon Balog) three siblings who have an enterprising streak as they scavenge for scrap metal and trade it for petrol to fire up their father’s generator so he can build a family bathroom. They have had no lavatory since being evicted from their previous home. But they knuckle down to it with good humour, playing imaginatively together in the ruins of the family shack. As they laugh and tease each other they to have re-discovered the art of play, far away from hollow materialism and social media. These Roma may be living on the margins but they are not lost or lonely or angry – and they all pull together to help one another. Despite their grinding poverty, there is a humanity and sense of community here that many more affluent families have lost in today’s more materially rich world. Out of the wreckage and squalor comes a beacon of hope. MT