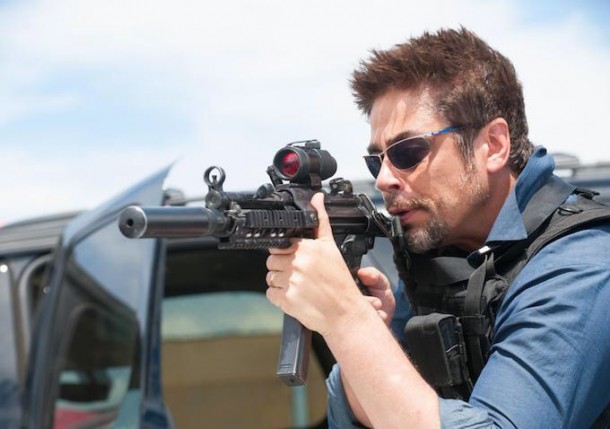 If it’s a pounding nihilistic macho thriller you’re looking for, Denis does the job here with this Michael Mann style Mexican-themed drug-busting ‘actioner’. Once again the Americans are down on the Mexicans, this time due to their high-level drugs operation which is feeding a ready market from wealthy US buyers on American soil.

Josh Brolin is well-cast as a swaggeringly confident US official Matt Graver, who will lead a raid against a Mexican cartel safe house on the Arizona border near to Phoenix. With him is with his catatonic side-kick Alejandro (Benicio del Toro), who is still getting over the trauma of his wife’s brutal murder. Emily Blunt is the token female FBI Agent called in to add ‘intelligence’ to the operation. As Kate Macy, she appears to be highly skilled and professionally sure of herself but is soon cut down to size by Mr Graver’s snide banter that diminishes her sangfroid early on in THE proceedings during the raid which leads to an horrific discovery: Kate soon realises that she is involved in something way beyond her capabilities.