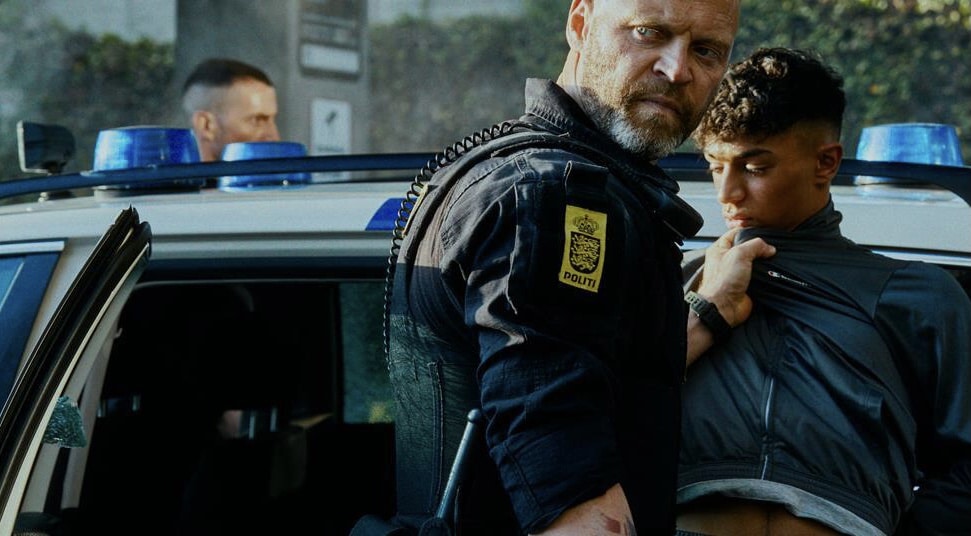 Shorta is an intelligent a police thriller tucking a range of weighty social issues firmly under its belt for an adrenaline-powered ride.

Danish first time directors/writers Frederik Hviid and Anders Olholm unpack the role of the today’s police in a crime caper that never lets up in dealing with racism, immigration and misogyny. The violence is hard-hitting but never gratuitous.

We start with the familiar good cop/bad cop routine: a day after a teenage immigrant is gravely injured by police, the squad boss asks officer Jens Hoyer (Sears) to keep an eye on fellow officer Jacob Lohmann (Andersen) who has a track records of open racism and misogyny, and enjoys provoking immigrants – something to be avoided on a day of high tension, even so when their patrol covers the infamous Svalegarden estate where the young victim lived.

At first the cops’ behaviour is true to form: Hoyer the voice of reason, Lohmann a brutal bully. Their relationship is made even more fraught by Jens having been a witness when the teenager was put in an arm lock by the police. Lohmann more or less threatens Hoyer to lie to the internal investigators maintaining that no excess force was used during the incident – appealing to his esprit de corps. Enter Amos (Zayat), a teenager from the same estate, deliberately throwing a milkshake at the two officers in the squad car. Amos is arrested and it soon emerges that  the victim of police brutality has died in hospital and more violence follows for all concerned.

Although the director keeps his distance, his message is clear as day: the police cannot be expected to deal with issues caused by politics and parents who are no longer responsible or even interested in their kids. There are two scenes which really are heart-breaking: Lohmann fighting a German Shepherd in a lift: no prizes for guessing who survives. When are filmmakers going to stop kill off their dog characters? Still, Shorta makes its point and is entertaining – if you disconnect from reality. AS