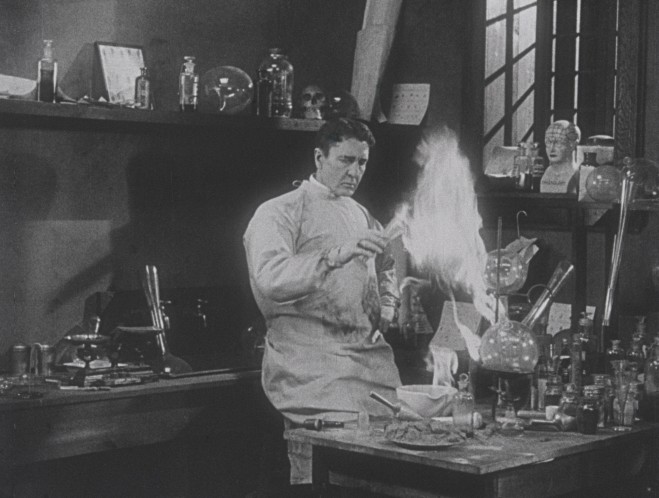 Sherlock Holmes’ first film appearance was in Sherlock Holmes Baffled in 1900 and he has been a regular fixture on cinema screens ever since. In 1899 the American matinee idol William Gillette (1853-1937) had starred in a stage version of the great detective’s exploits written by himself with Conan Doyle’s approval with phenomenal success (he appeared worldwide in the role about 1,300 times) and virtually made a career of the role – as celebrated in his day as Basil Rathbone and Jeremy Brett would later be – which he was still performing on stage as late as 1932. The play was very loosely reworked for Rathbone in 1939 as The Adventures of Sherlock Holmes, and Gillette himself made a film version for Charlie Chaplin’s company, Essanay, in 1916. Long tantalisingly thought lost, this precious record of Gillette’s performance was recently rediscovered at the Cinémathèque Française and nearly a hundred years after its original appearance lived again at this year’s London Film Festival.

Apparently a faithful adaptation of the original play, the film version negotiates the problem of making a silent version of a stage production by using the titles to describe the action and the motivations of the characters (often before you actually see them for yourself) rather than simply transcribing the dialogue; much of which is left to lipreaders to decipher. The film itself is watchable, but the story itself – concerning incriminating letters with a scowling Moriarty (Ernest Maupin) later brought in to liven up the proceedings – is uninvolving, and Gillette’s Holmes is given little opportunity to display the quick-wittedness and deductive genius that makes the literary Holmes so fascinating to this day. The conventions of the screen Holmes had not yet been firmly established by 1916, so to modern audiences anomalies include the marginal nature of Dr Watson’s role in the proceedings – as played by a genial Edward Fielding, (who resembles the late Guy Middleton), he disappears for most of the first two-thirds of the film after being introduced early on and seems less in awe of Holmes that is customary – and the suburban street with grass verges and trees purporting to be Holmes’ address (Watson lives elsewhere).

The feature film was still relatively new in 1916, but a hundred years on SHERLOCK HOLMES holds up satisfactorily. The action mostly takes place indoors, the camera very occasionally pans and tracks laterally to follow the action, but closeups are rare and the occasional use of interesting camera angles serves to remind one that most of the action is staged in medium shot as seen from a proscenium.The editing is pretty basic, and although a silent film there are no irises in or out. The most unusual stylistic ‘tic’ shown by director Arthur Berthelet is the use of swift dissolves to give us a closer look at moments of particular drama rather than straight cuts. The acting is pretty natural, and Gillette if anything underplays the part of Holmes. He was in his sixties by the time he made the film version and despite being deprived of his speaking voice certainly looks the part, strongly resembling a somewhat elderly Clive Brook (who himself took on the role on screen in 1932).

The version found in the Cinémathèque Française had been expanded in 1920 for release as a serial, so the running time above is unfortunately longer than it would have been in 1916. RICHARD CHATTEN