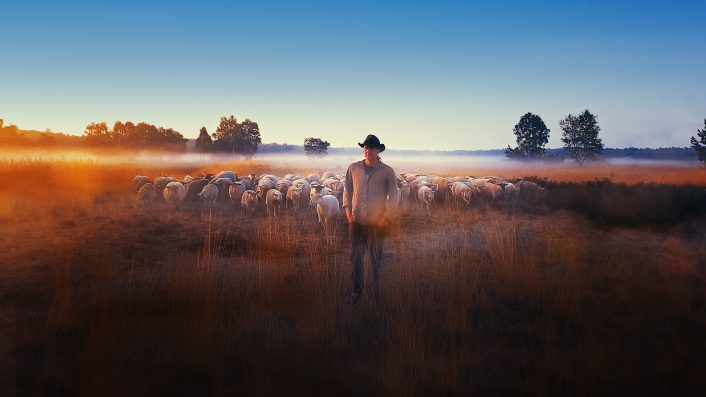 Being a shepherd sounds an idyllic existence. But the bucolic opening scenes of Ton van Zantvoort’s gorgeously cinematic arthouse documentary soon give way to the harsh realities of modern herding as a profit-making business.

The film’s focus is traditional herder Stijn Hilgers who starts of with a romantic view of life, enjoying the peace and freedom that comes with caring for a flock of sheep, as one of the last remaining sheepherders in the Netherlands. We see him waking up in the morning mist as he heads out for another day in the flower-strewn summer meadows. But his idealism soon clashes with the difficulty of being a modern freelance entrepreneur. Confusingly, the next scene sees him in a spacious living quarters, with a partner and child (and a hair cut!) as they furiously crunch numbers to see if they can eke out another year in this precarious, but ancient trade.

Along with many people nowadays who give up lucrative jobs to enjoy the freedom of self-employment in cottage-style businesses, Stijn’s freedom has come at a price. Ironically, he has had to strive year after year against mechanisation, competition, lower farm subsidies and administrative hurdles. When he then sets off to Utrecht to discuss his main grazing contract, he finds out it will not be renewed following year, seeing him risk bankruptcy or worse. And he now has a growing family to support.

So is there really such a thing as freedom as a shepherd. Apparently not. Even when you’re unafraid of hard work. Stijn’s world is now dominated by market forces and arcane laws. And you can see the gradually irritation creeping into his expression as he unwillingly transformed into a modern entrepreneur, taking not only his wife and sons with him, but also his parents as well. There are moments of humour as Stijn is forced to herd his entire flock through a neighbouring village to the consternation of locals who bombard him with complaints about sheep turds. This engaging documentary shows how a man’s fight to makes a success of his life somehow turns into a Kafka-esque nightmare as the freedom of the early scenes give way to nights of the dark soul-searching in his external and internal struggle to survive. MT