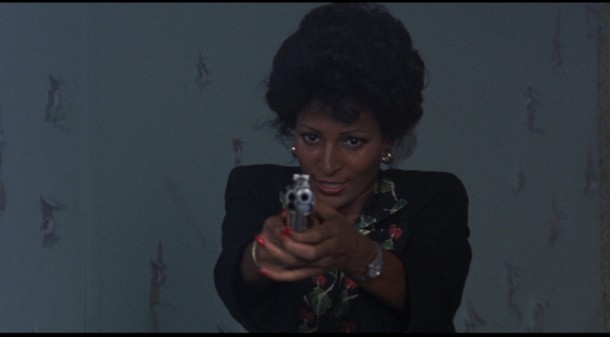 Postergirl for Blaxploitation Pam Grier (Jackie Brown) was crowned its unquestioned Queen during the 1970s for bringing a feline, charismatic energy to cinema albeit of the low-budget variety – such as that of American International Pictures (who were also involved with Roger Corman’s horror outings). In 1975 alone she starred in Bucktown and Friday Foster along with this breezy cult classic. SHEBA, BABY was written and directed by William Girdler who – had he not died tragically in a helicopter crash at the age of 30 – may have gone on to a successful career and this valiant if amateurish drama brings an (almost) all black cast (Austin Stoker and D’urville Martin) to an upbeat story of  crime on the streets of Chicago. Carried along by the graceful sensuality of Grier, who is both strong and compellingly sexy as ex cop Sheba Shayne with lines like: “Don’t give me that ‘back in town’ shit”, as she  forcefully knees one of her male victims into a headlock. Apart from its glimpses of seventies Chicago: known for edgy architecture and urban design (we get to glimpse some of the many fountains, the famous Police Headquarters, Dulles Airport and Lake Michigan), SHEBA, BABY has a catchy soundtrack – not as suave as Shaft but along those lines. Grier also enjoys some lovin’ moments with her sinuous co-star Austin Stoker adding spice to this also-ran but iconically seventies crime caper. MT