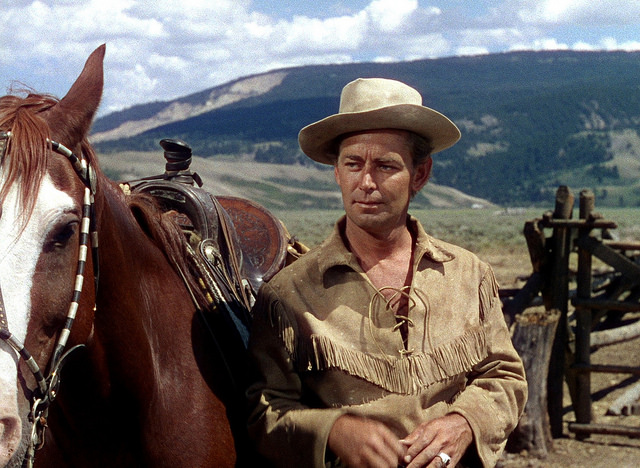 SHANE is the middle part of George Stevens ‘American Trilogy’, preceded by A Place In the Sun (1951) and followed by Giant (1956). He filmed Jack Schaefer’s novel as an archetypical conflict between cattlemen and homesteaders in the modern West; a theme that was to be taken up again in Clint Eastwood’s Pale Rider and Michael Ciminos’ Heaven’s Gate.

Sometime after the enactment of the Homestead Act in 1862, Shane (Ladd), a professional killer, meets a pioneer homestead family, the Starretts, in Wyoming. Over dinner, they discuss the plight of the families fighting the brutal cattle baron Rufus Ryker (Meyer). Joe Starrett (Van Heflin) offers Shane a job and the latter accepts. Starrett’s wife Marian (Jean Arthur in her last role, her only colour film), develops a rather ambivalent relationship with Shane: on the one hand, she does want Shane to teach her son Joey (de Wilde) how to shoot, on the other hand she looks at Shane in a way which speaks of an emotional conflict. Jack Wilson (Palance), a killer hired by Ryker, taunts “Stonewall” Torrey (Cook jr.) a proud Confederate soldier, and provokes him to a duel which Wilson easily wins against the un-experienced farmer. At Torrey’s funeral, many of the farmers want to sell their land to Ryker, but in the end, Starrett convinces a majority to fight and tragedy ensues for all concerned.

An underrated director, Stevens he was a stickler for detail and had started his career as a DoP. SHANE was shot between July and October 1951, but Stevens took his time over the editing and the film was eventually premiered in April 1953. The film’s budget of 3.1 M$ was so considerable (particularly for a Western), that Paramount tried to negotiate with Howard Hughes to take SHANE off their books, but Hughes pulled out. In the end SHANE made a very decent profit. Strangely enough, the two macho heroes of the film both had their problems: The scene in which Ladd teaches the young boy how to shoot, runs to 116 takes. And when Palance jumps on his horse, it turns out, that the actual shot was of him dismounting the horse, played in reverse. In another scene, Palance was supposed to gallop into the town on his horse, in the finished film, the horse walks slowly towards the camera. And in the grand finale in the bar, when Ladd shoots Palance twice, one can see him blinking. In the rather sentimental good-bye scene at the end, de Wilde crossed his eyes and stuck his tongue out. Ladd was so angry that he told the boy’s father: “Make that kid stop, or I’ll beat him over the head with a brick”.

But SHANE is still a very modern film, as the following dialogue proves: when Shane teaches the boy how to shoot, Marian interrupts: “Guns, are not going to be part of my son’s life”. Shane argues, that “a gun is a tool, not better or worse than an axe, shovel or any tool.’”And: “A gun is as good as the man using it.” But Marian insists that everyone would be better off if there weren’t any guns, including Shane’s. AS