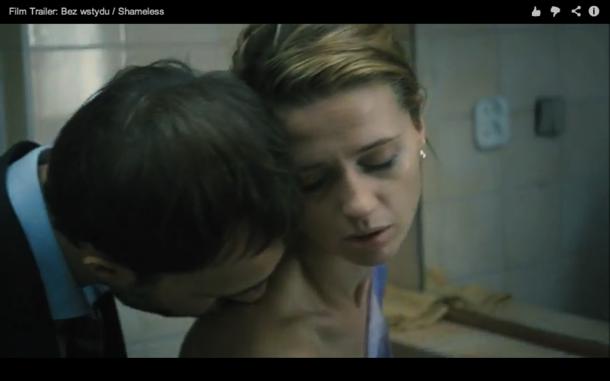 Shameless is director Filip Marczewski’s feature debut and quite a debut it is too.
Mateusz Kosciukiewicz plays Tadek, an 18 year old holding an unhealthy infatuation with his beautiful and sexually active older sister Anka. She however, has the hots for Andrzej an ambitious would-be neo-Nazi politician.

Into this already complicated mix comes Irmina, a feisty young gypsy who takes one look at Tadek and knows he is destined to be hers, if she can but break the ties that bind…

Of the many things that are refreshing about European films, one is sex. The Polish Film Festival is already yielding more than one title with not only a preoccupation with the subject but also a fascinated portrayal. No prudish, suppressed toothless American ideology here, but all the mess, the complexity, the darkness and the desperation spread out for all to feel.

This isn’t to say that Shameless is at all pornographic or gratuitous. It isn’t. In fact the sex is muted in comparison to some other films in the festival, but the adult way in which the topic is tackled is a breath of fresh air in comparison to the spotty teenage boys that rule Hollywood shenanigans.

Mateusz Kosciukiewicz is a real find and I’m sure a career beckons for his understated handsome charm coupled with juvenile Jagger-esque looks. The two women, Prochniak and Grochowska are also compelling and the supporting cast are excellent, adding a weight and authenticity to the piece.

Award-winning writer Grzegorz Loszewski has come up through television writing, but it is pleasing to see that the transition to film has not been at all difficult or lumpy. He has written a well-tuned, mature and balanced piece; a meditation on love, need and desire, with Romeo & Juliet overtones and that time worn but no less valid sentiment that you always want what you can’t have… tonally, it’s spot on.

Another strong offering from the Kinoteka then, leaving me hungry for more from this hugely exciting and so far captivating festival. Seek it out. AT