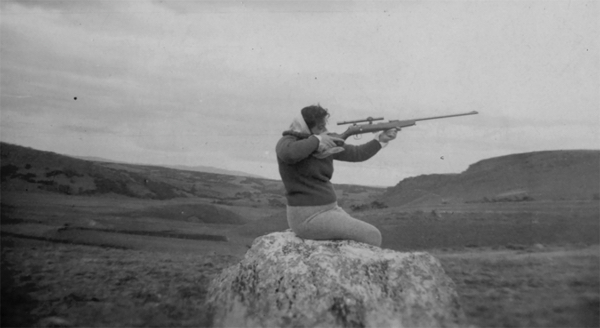 Amongst the wealth of stories coming out of South America at the moment is this unique and visually arresting first feature unearthing an alarming history of exploitation and repression in a Patagonian mining town.

Argentina’s Tatiana Mazu sets a combative tone to her documentary essay which takes the form of seven books, and shows a woman with rifle (the director herself?), ready to push back against old stories of witchcraft. Clearly these are a feisty bunch who don’t take kindly to a macho culture where women were forbidden to enter the underground labyrinth, which is ironically ‘female’ and talks in a women’s voice

The mine was run until 2002 by Sergio Taseli, a local asset stripper, who embarked on several high cost local projects such as the Roca-Belgrano Sur Railway, which were never completed, Taseli collecting his share of the profits beforehand.

But accidents do happen, and we see the photos of the victims. In 2004 fourteen miners died underground after a collapse. Children play amongst the wreckage in old 8mm family films, and Mazu makes use of plans, etchings, drawings, and blueprints to add grist to the grim story. It also emerges she once built a bomb with her chemistry set, intending to create havoc with the establishment.

Then there is the story of Clara who had a sex change operation, and went on to study electro mechanics. After graduating she could only find work as a secretary in the mining company offices. Nowadays, she is one of the few women working underground. But the exploitation continues: after a strike, the leaders were dismissed, and the rest of the workers had to take on their work load.

The oppressive nature of the mine is reflected in deadly silence and stark images, both In colour and black-and-white: Nature Was raped and it’s jewels torn away, crevices appearing everywhere, dark lakes and endless rows of pre-fabricated huts. There are shades of Tarkovsky in the water and the dour surroundings where industrial waste proliferates. Editor Sebastian Zanzotera takes credit for the montage of striking images that lead us into a maze of death and patriarchy.

Mazu takes us to a hidden world, far away from everything, where the newsreel images of Buenos Aires or a Miss Argentine competition seem to be from another universe all together.