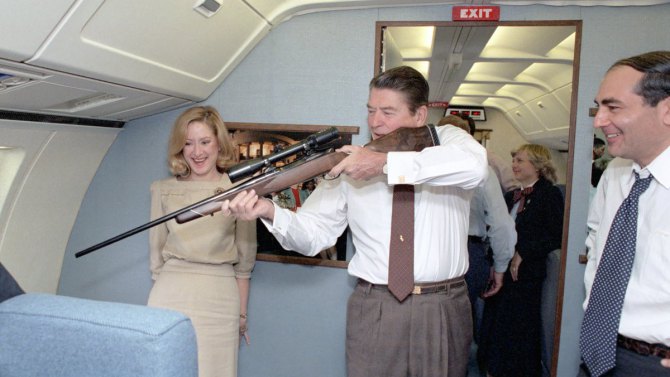 In his well-crafted documentary based on Andrew Feinstein’s book. Johan Grimonprez tries to flesh out and shed further light on the well-known but nonetheless inflammatory subject of arms trading and, crucially, the finance governments receive from the racket. Whilst our leaders try to distance themselves from it, they condone the damage it causes by perpetually greasing the wheels of the gravy train that rolls on from one to the next, like a lucrative hot potato.

The evidence is all there and is masterfully curated by Grimonprez and corroborated by talking heads and witnesses who profess incredulity. The whole process started back in the 80s during Ronald Regan’s time in office when the term ‘special relationship’ with the UK’s Margaret Thatcher was first coined (and later passed to Blair, Bush and Obama) and  led to and facilitated a profitable trade with Saudi Arabia that escalated into an ubiquitous state of perpetual international conflict – still happening today – and ‘affectionately’ termed (and I use that term ironically) the ‘War on Terror’.

According to the alledged findings of Shadow World, which seem entirely plausible – this is a conflict that shows no signs of abating, and why should it when one considers the positive contribution that it has made to those concerned.  Not a documentary that will make you leave the cinema laughing. MT