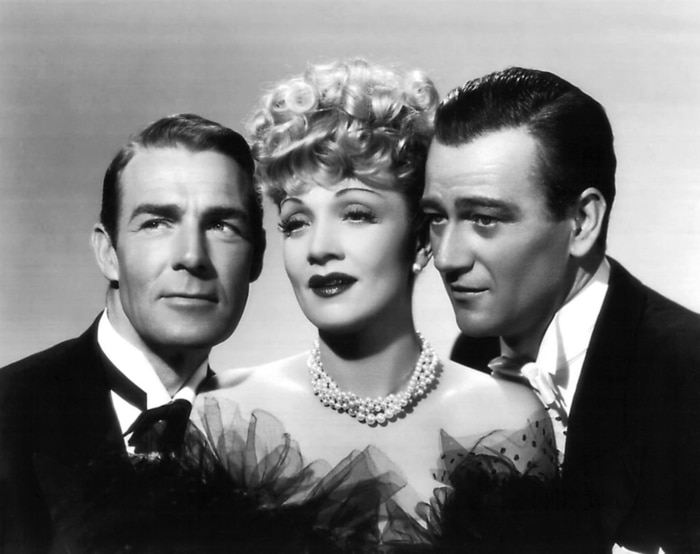 These four classics from the Golden Age of Hollywood showcase the timeless charisma of Marlene Dietrich (1901-1992). Seven Sinners, The Flame of New Orleans, The Spoilers and Pittsburgh were all produced by Universal during the war years of the early 1940s, and capture Dietrich’s enduring persona that had justifiably brought her the fame and riches garnered during her six magnificent collaborations with Josef von Sternberg. Dietrich continued to be the epitome of big-screen glamour and sensuousness, and although she never quite attained the dizzy heights of her time with von Sternberg, she continued working until the early 1960s, her last substantial role being in Stanley Kramer’s Judgement at Nuremberg in 1961. MT 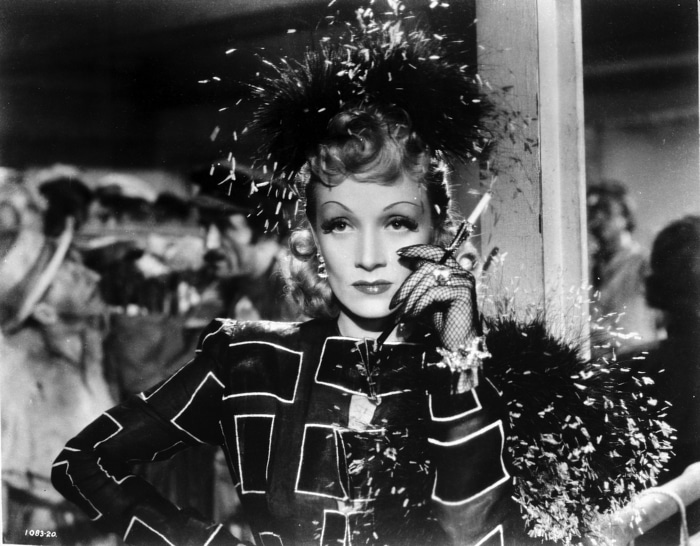 Seven Sinners is the first of three films starring Marlene Dietrich and John Wayne – Pittsburgh and The Spoilers followed in 1942. This lively musical showcases the versatile talents of a vampish Marlene Dietrich following her spectacular comeback in the standout Western Destry Rides Again (1939), after being branded “box-office poison.” Once again she plays a dubious gaiety girl and entertainer to John Wayne’s honest and gallant lover, Navy Lt Dan Brent (from Stagecoach). After the Wild West, the South Sea Island setting is luminous and exotic (complimented by Rudolph Maté’s sublime shadowplay). Dietrich’s Bijou sings her lovelorn ballads with a great deal of charm, in a similar vein to her 1930s triumphs with von Sternberg yet somehow bereft of the innate style and emotional heft of these outings, Dietrich trying – unsuccessfully – to keep her troupe of motley misfits under control. There is Antro (Homolka), Dr. Marin (Dekker), Little Ned (Crawford and Sasha (Auer). When Dan Brent enters the fray with a big bouquet of orchids, Dietrich has to save him from the knife-throwing Antro – and also from himself, because an affair would have destroyed Brent’s career chances, and one of Brent’s superior’s quips is fittingly: “the Navy has already got enough destroyers”. In the end, Bijou leaves him to his first love: The Navy.

The script by John Meehan and Harry Tugend is a mixture of songs (by Dietrich), brawls and witty repartee. Russel A. Gausman’s production design, and the Maté’s camerawork are both stars turns in their own right, bringing to mind a Joseph von Sternberg feature. Sternberg, who directed Dietrich in Der Blaue Engel and her first Hollywood films, was known as her Guru, and his style and influence on the actress still shape her appeal. The set design was intricate, with elaborate windows and labyrinthine staircases and an overall ornate richness, coming to life in Maté’s fluid camera. Many of Sternberg’s movies (Macao) fall into the “Exotica” category, here symbolised by the huge gargoyle in the club were Bijou performs, recalling Sternberg’s Scarlett Express, where Dietrich was flanked by huge statues. Dietrich is in perpetual motion, an ethereal angel in satins and haute couture, driving the narrative forward a lightness of touch. Again, in a nod to von Sternberg, Dietrich wears the white Officers uniform, mirroring Wayne/Brent.

This is very much Dietrich’s film  (“I am a bad influence”). Wayne is her acolyte – he had only just made the step from support to main player, and it shows. Tyronne Power, who was originally cast, would have certainly been a stronger pendant to Dietrich’s Bijou. Garnett favoured maverick stars for his films, often casting those who’d fallen foul of established society, such as Greer Garson’s Mrs. Parkington (1944) and Valley of Decision, a year later. And whilst Garnett does not always reach the heights of von Sternberg, Seven Sinners is a glittering piece of entertainment. AS 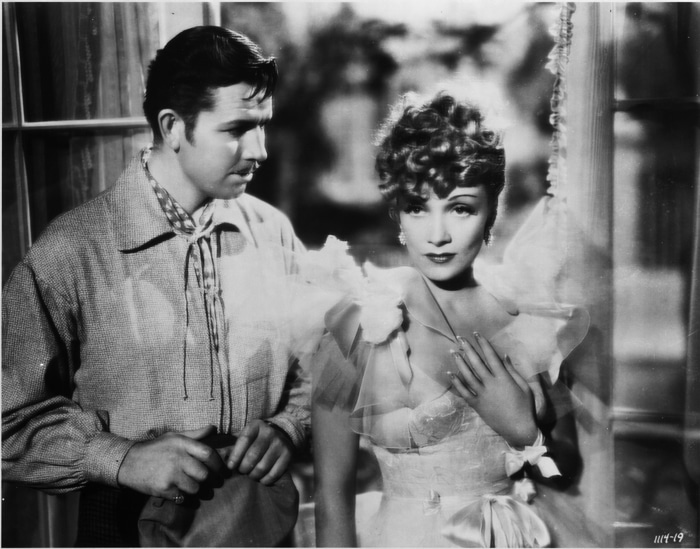 With its sequences of social realism picturing the grimness of Pittsburgh mining traditions (as Groucho Marks once commented: “this is like living in Pittsburgh, if you call that living”, Lewis Seiler’s 1942 morality tale is certainly the least glamorous of the trio of films Dietrich made with John Wayne. Greed is the theme here, and Seiler sets the scene from the get-go with a rousing speech from Wayne’s Charles “Pittsburgh” Markham who is hellbent on financial success in the steel industry, whatever the cost. To get there he’ll trample on friends and lovers, but when the sh*t eventually hits the fan, he does get a second chance. The film came out a year after Pearl Harbour, which is also cleverly wound into the plot line. Randolph Scott plays Wayne’s rival and Dietrich the smouldering siren Josie Winters. MT 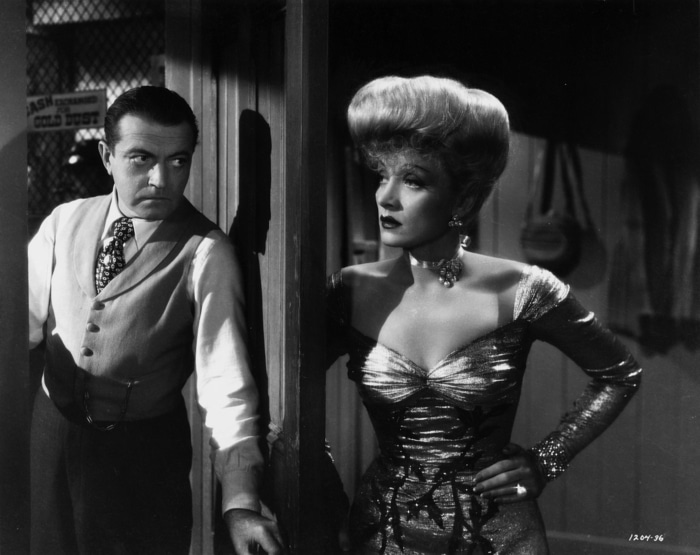 This 1942 version of a popular Rex Beach novel has been filmed three times before (twice as a silent) and another would follow. An eventful romantic adventure following a group of crooks adding corruption to its list of themes, the setting is Nome, Alaska, during the Gold Rush days of 1900. Hero John Wayne gets the bit between his teeth, and particularly in the final showdown set-to in the bar with crooked gold commissioner Randolph Scott and good guy John Wayne, all over a woman, and the woman in question is the joint’s owner, Marlene Dietrich.

The swindlers have in their sights the biggest mine in the territory. They also have Scott’s McNamara on their side along with a dodgy Judge (Samuel S. Hinds) and his underling Struve (Halton). They plan to lure the wealthy punters in with the services of an upmarket Helen Chester (Lindsay). John Wayne’s Roy Glennister falls for her. Wayne and Scott take to their action roles with a swagger, and Marlene does her stuff with a succession of elegant and seductive costumes. She’s not just a pretty face but a witty and entertaining hostess enjoying some comedy moments with her maid Marietta Canty. And she’s a mistress of the put-down too, making short shrift of an unwelcome suitor in the shape of Richard Barthelmess, dismissing him with a curt: “Go down below to your table.” MT 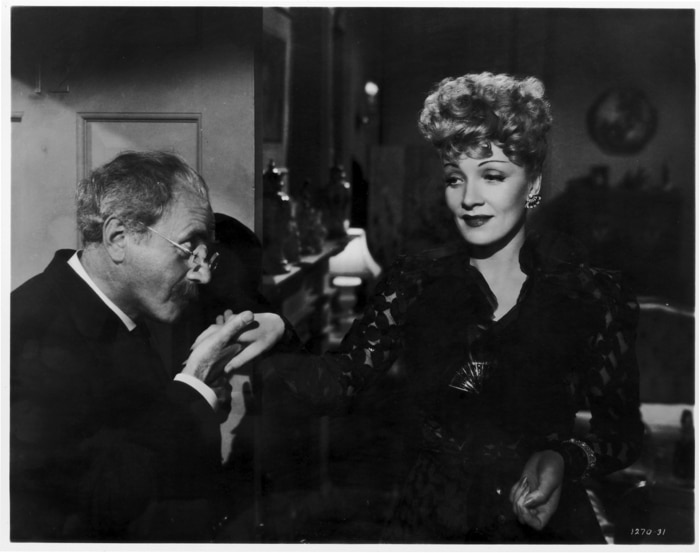 After the end of her partnership with Josef von Sternberg, Dietrich echoes her role in Destry Rides Again this time in Rene Clair’s farce Flame of Orleans. Once again she plays woman with a dubious past, this time cutting a dash as a ‘faux’ countess in New Orleans, torn between a stable marriage to a rich banker and her wild sexual attraction for a strapping but penniless captain of a Mississippi steamer. This was the first of the four films that Clair directed in Hollywood during his wartime exile from France. Norman Krasna wrote the entertaining script but Dietrich sets the night on fire with her flirtatious game-playing in a delightful costume drama that was Oscar nominated for Jack Otterson’s stylish art direction, Russell A Gausman’s set design and DoP Rudolph Maté’s peerless visual allure. MT