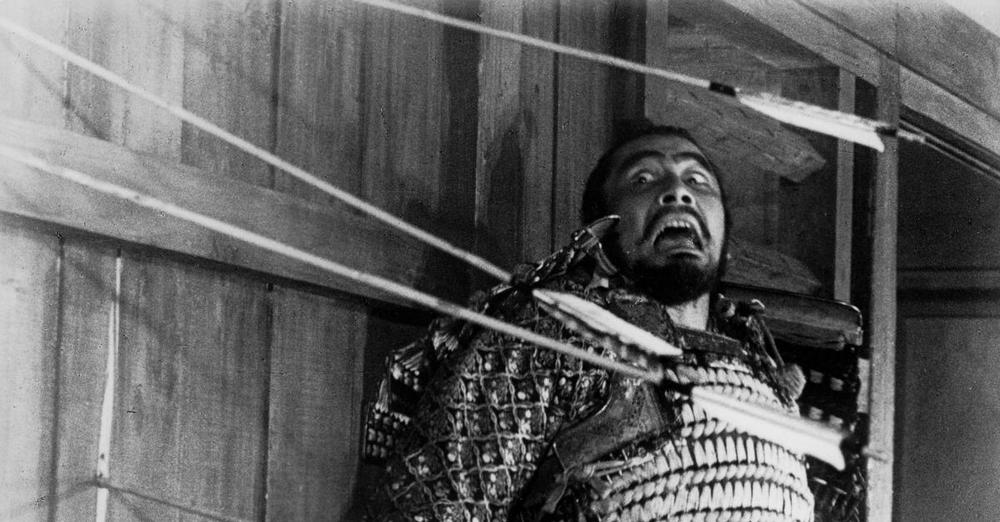 Japanese director Akira Kurosawa (1910-1998) is really the father of action films, his 1954 feature SEVEN SAMURAI not only spawned countless remakes such as John Sturges’ Magnificent Seven (1960), but was also ‘midwife’ to the Italo-Western, the Star Wars franchise and a signature school of French crime films, best represented by Jean-Pierre Melville, with his melancholic 1967 police produral Le Samourai (1967).

Kurosawa himself is indebted to John Ford, whose Westerns were really existentialism in disguise. Seven Samurai’s primary photography took over a year to complete, with a budget of $500 000, the biggest for any Japanese feature at the time.

Set during the last knockings of the 16th Century this Jidai-geki (historical film) takes place in 1587 when feudal landlords were still engaging in protracted battles, further depleting the already impoverished rural population of Japan. The various factions here are in thrall to warring aristocrats: the villagers  regularly fall prey to marauding bandits, who are often ex-samurai, and the unemployed samurai or Ronins who have come to the help of the farmers. The Robins are led by Kambei (Shimura), a master strategist.

The three-stranded narrative centres on the seventh samurai Kikuchiyo (Mifune) – who is actually not a samurai at all, but a farmer aspiring to become one. Samurai are honour bound to work for just lodgings and subsistance, repelling the local bandits in preparation for the battle itself. The villagers have a hard time protecting their womenfolk not only from the outlaws, but the Samurai warriors themselves: one of the locals Manzo (Fujiwara), is so worried about losing his daughter (Shino (Tsushima) he cuts off her hair so she looks like a boy, but still falls for the masculine charms of Katsushiro (Kimura), and gets a good hidings from her father into the bargain.

Eventually the farmers do triumph over the bandits, but it’s a Pyrrhic victory that sees them returning to their gruelling daily grind. The once very powerful Robins are meanwhile slowly written out of history.

DoP Asakazu Nakai shot twelve of Kurosawa’s features. His dazzling set pieces keep up with action as the camera glides from one sensational rush of images to the next. Even the so-called quiet moments are full of visual mastery in a compilation of single shots: Kurosawa used multiple cameras to cope with the avalanche of live combat scenes. The bandits are a force to be reckoned with: on their small horses they like look ants swarming down from the mountains to torment the villagers. Seven Samurai is a continuous succession of confrontations and skirmishes even before the final battle, masterfully orchestrated by the villagers’ ally Kambei. But their defence barriers are no match for the outlaws sheer relentless aggression, although they do have a few nasty tricks up their sleeves, mercilessly killing injured bandits and looting their weapons in acts of appalling brutality.

Seven Samurai won the Silver Lion at Venice in 1954. Kurosawa developed into the most ‘western’ director in his country, and his name became synonymous with innovation, setting himself up as an idol for avant-garde filmmakers all over the world. AS

Along with the re-release of SEVEN SAMURAI, there will be a two-part season at BFI Southbank. Part one (18 October – 30 November) surveys the great Japanese studio era from the 1930s to the early 1960s and includes a Halloween J-HORROR WEEKENDER. Part two (1 – 30 December) features 20th century Japanese films made after 1964, including the New Wave and genre classics of the 1990s. There will also be a raft of regional events and screenings of other great Japanese films and a film programme on BFI Player