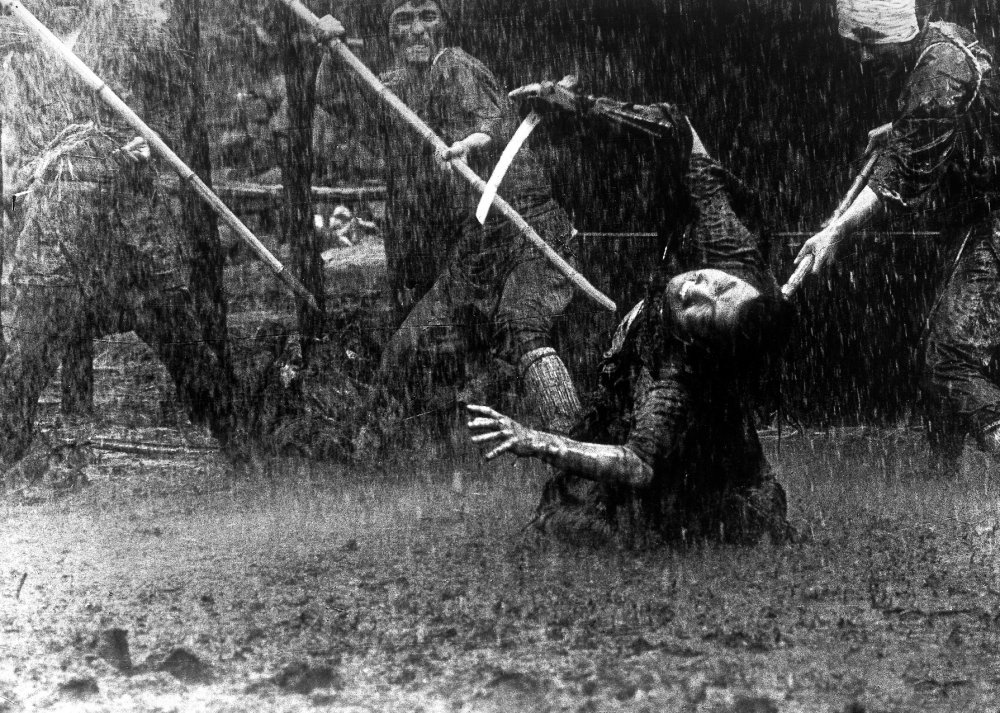 It took Kurosawa 148 shooting days, stretched out over a year, to complete this war saga which has lived on in many a Western form. The Magnificent Seven and other countless Italo-Westerns have now borrowed from the Japanese master. Kurosawa acted as his own editor working hard every night after shooting to bring form to the deep focus images of his regular DoP Asakazu Nakai (Throne of Blood, Ikuru, Red Beard). In sharp contrast to the brutal passion of this remarkable endeavour, Nikai was also responsible for Ozu’s penultimate feature The End of Summer in 1961.

Seven Samurai opens with a posse of bandits looking down on a village from a rocky outcrop. Their stock in trade is to plunder the farmers’ harvest, but decide to wait on this occasion as the harvest is not quite ready. Well aware of their plight, the villagers, among them Manzo (Fujiwara) and Rikichi (Tsuchiya), seek protection from some freelance Ronins in order to safeguard the crops. Mifune plays Kikuchiyo, the most legendary of swordsman despite his low rank. The villagers and samurai are initially wary of each other but they bond during the bandits’ onslaught.

A love story between Shino (Tsushima), Manzo’s daughter, and the samurai Katsushiro (Kimura), adds a frisson to the eve of the big battle, when he discovers that Manzo has dressed his daughter as a boy as a precautionary measure. The bandits have already kidnapped and raped Rikichi’s wife (Shimazaki), and she reacts violently when she sees her husband approaching their blazing hut. In the end farmers emerge as the true victors, and start preparations for the next harvest. The surviving Ronins wander off looking for a master and an honourable death.

Kurasawa’s cataclysmic images drag us into the disorientating vortex of the battle as the tempo accelerates and the body count mounts. Even the slow-motion sequences rage with extraordinary power, underlining the endless turbulence. Seven Samurai is spiritually very close to Wsewolod Pudowkin’s silent feature Storm over Asia (Sturm über Asien), its running time of over two hours was also unusual back in 1928. Both features showcase the central theme of conflict versus nature. Kurasawa also raises awareness of the intransigent male-dominated 16th century class system where fate was determined by birth, and women where at the bottom of the pecking order, sacrificing themselves in a nihilistic way – as does Rikichi’s wife. The men’s death is shown as honourable and full of purpose. 66 years after its premiere at Venice, where it won a Silver Lion, Seven Samurai has still the power to hit the audience like a tornado. This towering war epic helped to open up European markets to Asian cinema. AS


Seven Samurai will be back on the big screen in cinemas UK-wide from 1 May to thrill a new generation of action movie fans. The film’s re-release is one of the highlights of JAPAN 2020, a 5-month UK-wide season presented by the BFI to celebrate Japanese film; full details will be announced at a press briefing on 16 March. 2020 is also the centenary of the birth of the legendary Japanese actor Toshirô Mifune (1 April 2020 – 24 December 1997), who stars in Seven Samurai and who appeared in 16 of Kurosawa’s films.