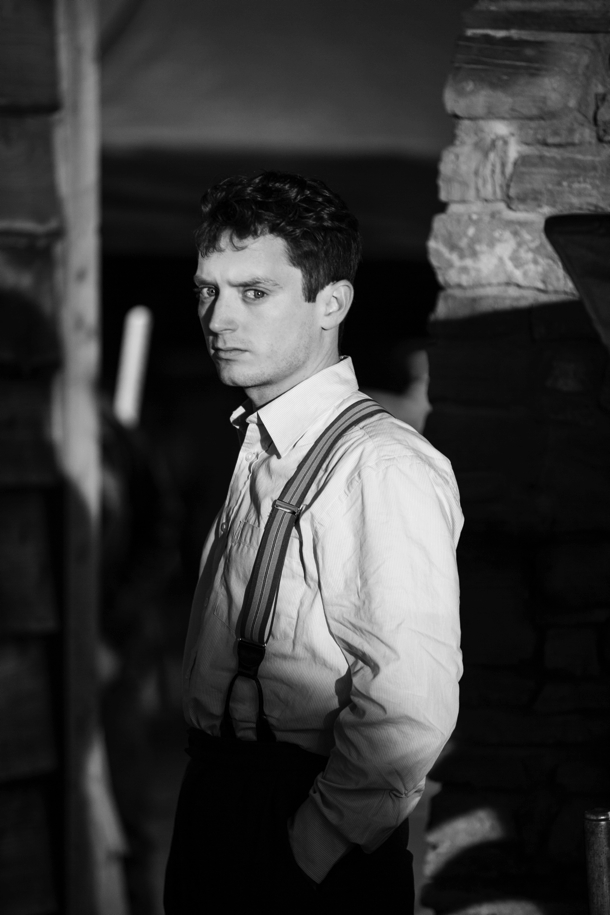 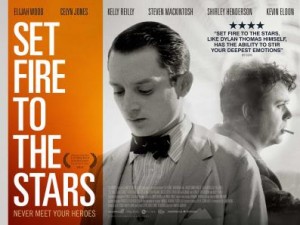 One of the very few non-dreadful UK productions to premiere at this year’s Edinburgh International Film Festival, SET FIRE TO THE STARS is the debut feature of Andy Goddard, whose previous directorial work includes TV’s Torchwood, Doctor Who, The Bill and, most recently, four episodes of Downtown Abbey as well as that show’s 2012 Christmas Special. Depicting the volatile relationship between Welsh poet Dylan Thomas and the American academic-cum-literary critic John Malcolm Brinnin, the film is a conceptually intriguing work whose chief strength is Chris Seager’s evocatively crisp monochrome digital cinematography.

Dylan Thomas (Celyn Jones) arrives in New York in 1950 with reputations preceding him: not only is he a much-lauded genius of poetry, he is also a drunken liability whose unfaltering approach to life is to enjoy it—to feel it and to sense it in all its excess. Drink now, worry later: Thomas is an unthinkably quick-witted partygoer who seemingly lacks an off-switch—though he arrives from Wales burdened with barely acknowledged psychological hang-ups and in palpable retreat from marital turmoil. Consequently, there’s a flipside never too far away. If he isn’t embarrassing himself before more attentive company by slurring his way through tortured, inebriated recitals, in private moments he stews in a debilitating swamp of depression.

Thomas is in America for a tour of performances organised by John Brinnin (Elijah Wood), who accompanies the poet after assuming responsibility for him and his behaviour. As one Yale academic puts it, Thomas is a “manchild… terrorising functions with his mischief.” Forever deflecting the serious professionalism required of him, the poet sends Brinnin out one night for milkshakes, candy and a comic book; when the latter returns, Thomas has disappeared. Before long, the hotel’s kicked the pair out, and they retreat to a picturesque country home in Fairfield County, Connecticut, where Brinnin feels better equipped to distract his visiting guest into something resembling a mental focus.

Thomas’ ceaseless antics not only test the patience of the more prudish Yanks around him, but also that of the film’s viewers. The dramatic crux of SET FIRE TO THE STARS is how far the man can go without confronting his alcoholism and apparently broken marriage—the sole reminding image of which is an unopened letter from his wife. While Thomas is the subject of Goddard and co-writer Jones’ script, it is through Brinnin’s perspective that the tale is framed. An obvious admirer of Thomas—perhaps beyond intellectual curiosity—Brinning asks the poet where he gets it all from: ‘it’ being his wit, his genius, his sensitivity and so on. Thomas snaps: “Why do you have to label it?” The film does little to demystify the poet.

Brinning is an unreliable narrator, and though telling their tale from his perspective facilitates an unusual narrative vantage point, the filmmakers don’t seem to know what precisely to do with it—beyond telling a tale about a tempestuous, uneasy relationship. Tellingly, STARS is at its best when its makers are compelled to explore the class tensions an appreciably popular working-class artist such as Dylan Thomas might stir. While earlier scenes—in which our temperamental but self-deprecating adult-baby outwits and outrages intellectual bowtie-wearing types while in full-on hedonistic pursuit of adoring babes—suggest a narrative pattern that may grow irritating rather quickly, the strongest (and funniest) sequence here involves deliberate crudity at Yale itself.

Obviously nervous about performing privately in front of the university’s higher ranks, Thomas takes a painful pause and many sips of water before beginning with a winningly stirring rendition of ‘And Death Shall Have No Dominion’. After, a more unbearable discomfort takes hold of the poet, as he finds himself at a formal dinner expected to keep up and hold court with the stiflingly snobby professors. As their highbrow pettiness leaks through, the Ivy Leaguers get their comeuppance when the Swansea-born writer deliberately lowers the tone by breaking into vulgar limericks. What better way to uproot the literary elite’s unflinchingly old-world views than by the evocative opening lines, “A whore from Timbuktu / Filled her vagina with glue”? Who said revolutions can’t start over dinner? MICHAEL PATTISON