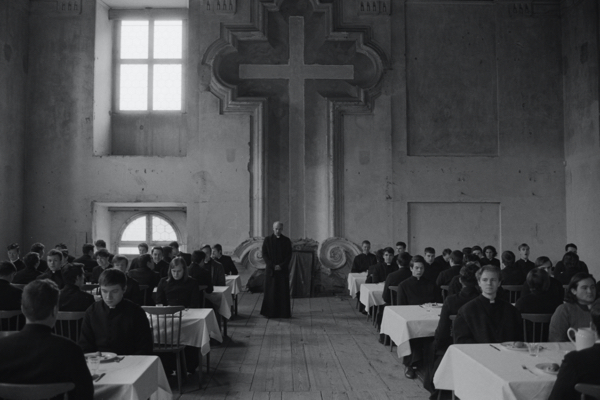 Slovakian director/co-writer Ivan Ostrochovsky creates a Bresson-like study of resistance set in a religious seminary in 1980 Bratislava (which back then was the capital of the Slovak Socialist Republic in  Czechoslovakia).

Shot in luminous black-and-white by DoP Juraj Chipikin in the old-fashioned 4:3 ratio, The Servants is a tightly-scripted Noirish portrait of temptation and belief.

The 1980s was a tough time for the Catholic Church whose religious freedom came under threat from the draconian cosh of the continuing communist regime. The clergy was divided into the regime-critical “catacomb church” which maintains contact with the Vatican and Western media, and the “ecclesiastical hierarchy” which cooperated with those in power and was represented by the state-sponsored priests’ association Pacem in Terris. (1971-1989).

Two young seminarians, Juraj (Skyva) and Michal (Polakovic) enter the Catholic institution in Bratislava to take the priesthood. Each must decide whether to collaborate with the regime or whether to remain faithful to their idealist views, and submitting to the surveillance of the secret police.

Most of the priests in the seminary are members of the Pacem in Terris group. Unfortunately for the two newcomers, their confessor is even worse: not only has he killed a man in a hit-and-ran accident, he is also an informer for the local Secret Service, led by Frantisek (Sulik), a medic who is in league with the Dean, Tibor (Strnisco).

Coufar (Obsil) meanwhile has been disciplined by the authorities but still organises secret meetings with scholars in his house and reports incidents to Radio Free Europe. Frantisek kills him, making it look like a road accident. But nobody is fooled and Michal joins the resistance group. Juraj is then threatened with being drafted into the army by Frantisek, but withstands the temptation. Michal, who does not know that Juraj has been interrogated, posts a leaflet on the noticeboard asking the seminarians to join a hunger strike in support of Coufar’s murder.

Ostrochovsky and his co-writers are particularly scathing about the collaborators in Pacem in Terris. The Dean and Frantsisek have a relationship founded on mutual collaboration – as Frantisek puts it: “if we fail to find the ringleader of the revolt in the seminary, both our heads will roll”. Coufar is the more cynical of the two: he produces Michal’s Secret Police File and tells him “You need to understand that we are not here to be happy”.

This is an austere but laudable drama enhanced by its stunning visual allure: there are astonishing shots of the inner courtyard of the seminary, showcasing an arena which serves both as a football pitch and a place for collective punishment. The Noirish atmosphere prevails, underlined by the protagonists’ long shadows, the night scenes artfully shot with one single light source. Servants is true to the spirit of Bresson whose hero Francois Leterrier from Un Condamne a Mort s’est Echappe is recreated in the resisters. AS

On Curzon Home Cinema on May 14th. As a virtual cinema screenings at HOME Manchester and ArtHouse, Crouch End as well as IFI@Home in Ireland | BERLINALE premiere in 2020