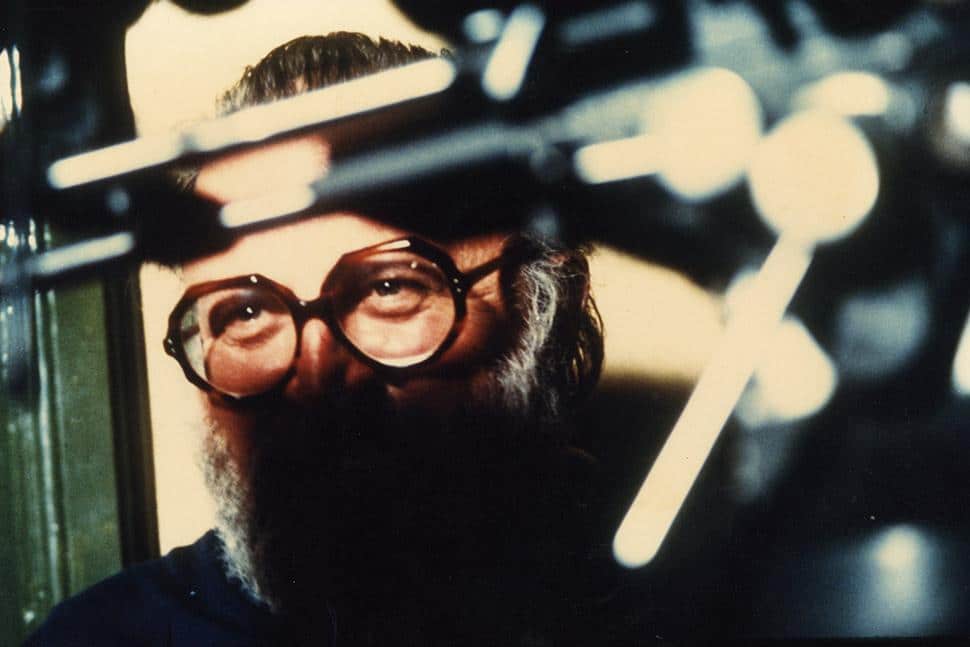 This new documentary on Sergio Leone opens with a dynamic introduction from longtime fan Quentin Tarantino who strikes just the right ebullient tone for an immersive look at the legendary director’s life and work from awarded filmmaker Francesco Zippel (Friedkin Uncut).

These opening scenes are cleverly edited in such a way as to reflect the smiling faces of many of Leone’s admirers – Martin Scorsese, Robert Niro, Clint Eastwood and Steven Spielberg – who like they are laughing along with Tarantino at the memory of Sergio Leone. And this positive jubilation seems to sums up the essence of an epic director, who first and foremost, considered himself as an entertainer in a career spanning nearly three decades from the early 1960s when he made his first feature film, The Colossus of Rhodes (1960) to his rather early death in 1989.

This is not the first biopic of the renowned Roman genre director – and it may not be the last – but Zippel certainly captures the iconic filmmaker’s talent to amuse on the big screen: “Cinema for me is above all a big show where events of the masked life are proposed”.

The son of eminent actor and director Vincenzo Leone (aka Roberto Roberti) from the early days of silent cinema, film was for Sergio Leone (1929-89) ‘his whole life’ and he used it to explore and expose his deepest thoughts and feelings from early childhood in Trastevere, Rome where he admits, in an archive interview, to seeing the world from the perspective of a little boy. Steven Spielberg, one of the film’s informative talking heads, picks up on this sentiment: “that man, inside and very close to the surface, was still a boy. A boy playing cowboys, a boy loving to entertain his friends, an entertainer and someone who wasn’t pretentious as an entertainer, but was generous as an entertainer.”

Leone’s biographer Sir Christopher Frayling also reflects on the personal nature of Leone’s films against a backcloth of archive footage from newsreels of the day: “they’re deeply personal for three reasons. Firstly they’re about a child who largely grew up in Trastevere, who remembered going to see Hollywood movies in the 1930s during the era of Mussolini when America was seen as a model of freedom and modernity. It was another world, and this child…loved those fairy tales. They’re autobiographical secondly because in 1943…the American troops landed in Salerno and came north to Rome, and it came as a shock to meet real life Americans for the first time. He couldn’t see in them anything of those characters I’d seen on the screen. This led to some disillusionment for young Leone. The third way in which they were autobiographical is his own formation as a filmmaker between 1949 and 1959 where he worked as an assistant director on 35 movies.”

Gian Luca Farinelli, director of the Cineteca di Bologna explains how Sergio was influenced, to a large extent, by his father’s keenness to make films that appealed to a wider audience; quality films that were also accessible to the mainstream. And a great deal of Sergio’s filmmaking passion seems to derive from his father’s often frustrated attempts in this regard. And although his father’s obsession initially put him off as a teenager, when Vincenzo retired and went back to his village in Lombardy, Sergio “felt a great urge to continue what he was doing”. It almost seemed to him like an obligation.

Clint Eastwood, who was working as a swimming instructor, initially said ‘no’ to the offer of a part in A Fistful of Dollars. The idea of spending his month’s holiday filming in Italy was not appealing and anyway, he had been starring as Rowdy Yates in a long-running TV series Rawhide (1959). Inspired by Kurasawa’s samurai epic Yojimbo, Leone dashed off the script in 15 days, his imagination fired up by the Japanese great’s depiction of a fairy tale novel, which transposing it to a Western. Although Eastwood didn’t speak any Italian, and Leone didn’t understand English filming went ahead in sign language, the director being transfixed by Eastwood’s ‘indolence’, describing him as: “a real cat-man, born lazy. He seemed to sleep as he walked. But when it was time, he gained a curious speed and dynamics”, et viola – Eastwood’s career suddenly took off, although for a time he never heard back from Rome although in the days following its Roman release Fistful had already made well over a million liras at the box office, confusing Eastwood who thought he’s starred in a film called The Magnificent Stranger. According to Frayling the working title was in fact Ray El Magnifico.

Zippel obviously touches on Ennio Morricone’s invaluable contribution music-wise. And Frayling describes how Leone “re-invented the Western story for a new generation – the children of Marx and Godard – who didn’t believe in it anymore” but, according to Frank Miller, were hooked in by ambiguous, larger and life nuanced characters “who had both good and evil in them”. The film then deals with each of Leone’s various features with collaborators chipping in and adding value with amusing anecdotes, including the late Eli Wallach.

Providing a comprehensive companion piece to the recent Ennio, and sometimes overlapping, Zippel and his team pack in an extraordinary amount of detail enriching the feature with animated sequences, personal photographs and ample archive footage in an engrossing look back at the director’s life and also at an era reflected in wide-ranging features from well-known westerns, historical epics to gangster thrillers and beyond. MT