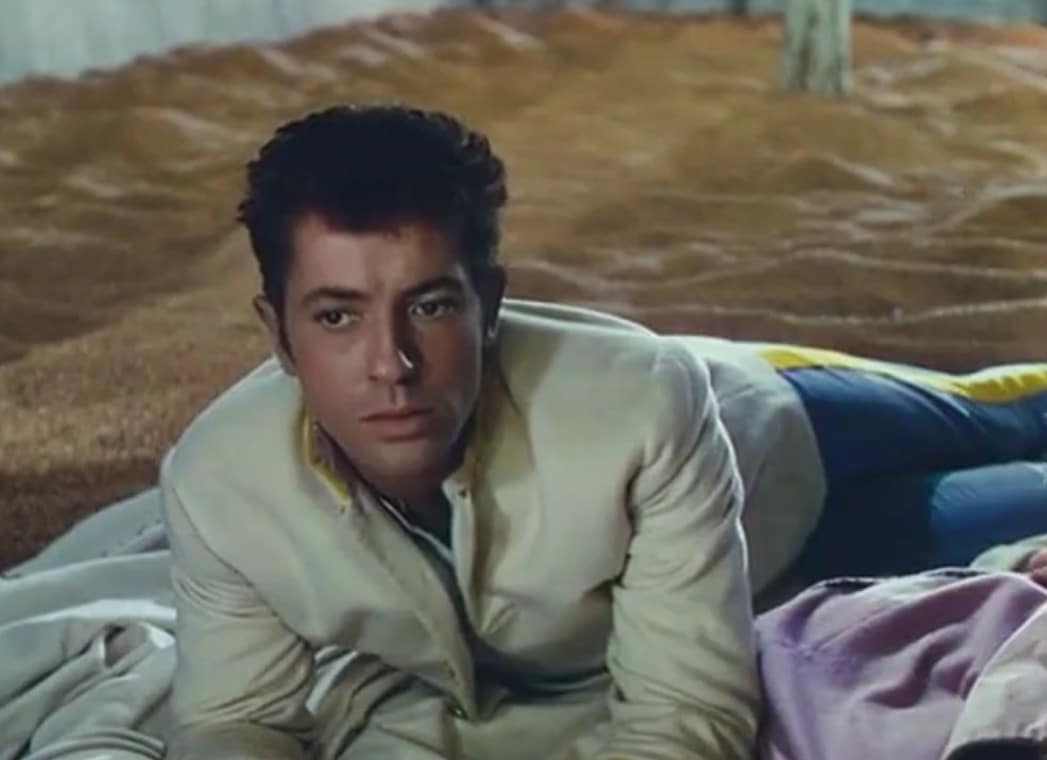 Visconti’s first film in colour and his first with a patrician 19th Century backdrop, Senso is a squalid tale of base animal passion with an epic grandeur that raises it to the pantheon of Great Screen Romances by courtesy of Visconti having robed his sixth feature in the trappings of the momentous historical backdrop of the Risorgimento of 1866, Venetian locations, plush interiors, immaculate costumes and Bruckner’s Seventh Symphony (which wasn’t actually composed until fifteen years later).

The plot actually has marked similarities to Joseph Losey’s The Sleeping Tiger, made concurrently in drab monochrome in postwar austerity Britain; in which refined Alexis Smith (married to decent but dull Alexander Knox) completely loses her head over delinquent Dirk Bogarde. Ten years earlier, Visconti himself made a much more unadorned treatment of greed and destructive passion with Ossessione (1942) an adaptation of James M. Cain’s sweaty tale of blue-collar adultery and murder, The Postman Always Rings Twice.

Maria Callas had been Visconti’s first choice for the part of Countess Livia Serpieri – a society wife who becomes infatuated with good-looking creep Lieutenant Franz Mahler (played in a gleaming white uniform by an obviously dubbed Farley Granger), but she had too many theatre commitments to take time out for the shoot which eventually took nine months to complete, and Ingrid Bergman was too wrapped up working with her husband Roberto Rossellini, so the role eventually went to Alida Valli. Still stunning, but already perceptibly older than during her late forties Hollywood sojourn, in the arms of Lt. Mahler Valli discovers an erotic fulfilment entirely new to her; but to Franz she’s just another notch on his bedpost, and someone to sponge off.

Marcella Mariani (who died in a plane crash aged 19, just six weeks after Senso‘s premiere) is rather sweet and vulnerable as the young prostitute Clara who is spitefully exploited by Franz to further rub Livia’s nose in his rejection of her. Rina Morelli has an eye-catching cameo flitting about Livia’s villa in Aldeno as her maid, who seems to be actively enjoying the thrill of her mistress’s affair. But the most blackly comic element in the film is the way that as momentous historical events escalate around them, she and her idealistic cousin Roberto Ussoni (played by Massimo Girotti) are shown to be completely oblivious to what is making the other tick.

Under the impression that Franz is waiting for her at an address to which she has been followed by her stuffy husband (Heinz Moog) she melodramatically declares, with her back to the door, that YES SHE HAS A LOVER!!!, only to discover the place occupied by Roberto and his revolutionaries eagerly making plans; as oblivious of the turmoil raging inside Livia as she is by now indifferent to their cause. She commits treason by sheltering Franz from the Italians, and then gets even deeper into corruption by helping him to avoid combat by giving money meant for The Cause to him. One of a number of loose ends in the plot is that we never find out what happens when it’s discovered that 200,000 florins have gone missing from the fund intended to finance The Revolution, has been filched by yours truly.

As her grip on sanity loosens, Livia’s wardrobe (the work of Marcel Escoffier & Piero Tosi) becomes more and more buttoned down and severe, the black dress she wears in her final scenes making her resemble some ferocious bird of prey. The distinguished Italian cameraman G.R. Aldo was killed in a car crash during filming (this was also his first colour production); and the opening scene in Venice’s Fenice Theatre is the work of his successor Robert Krasker, who himself walked out on the production after falling out with Visconti, leaving the film to be completed by Giuseppe Rotunno. Whoever shot the amazing close-ups of Valli – her eyes wildly darting from side to side as she becomes more and more unhinged – merits particular kudos. During the final confrontation in the hotel you’re expecting her to produce a gun and shoot Franz; but she achieves the same end by more deliciously vindictive means, and he ends up in front of a firing squad assembled at remarkably short notice while she careens into the night to a very uncertain fate.

Having ended with a bang, the final credits still have one more surprise to serve up when the first two names we see after Visconti’s turn out to be those of the future directors (on this occasion humble assistants), Francesco Rosi and Franco Zeffirelli.

Senso was shot in English, and there are a couple of excerpts on YouTube from the truncated 94 minute English-language version, ‘The Wanton Countess’ which enable you to hear Granger in his own voice speaking dialogue written by no less than Tennessee Williams and Paul Bowles (thus confirming suspicions that we are witnessing a Venetian variation on A Streetcar Named Desire).

By the 1970s Visconti could finally make a film truer to his own inclinations in Death in Venice (1971), with Dirk Bogarde – once the object of infatuation himself in The Sleeping Tiger, but now the one smitten – in a production again dressed up to the nines, handsomely set in period, again using beautiful Venetian locations and this time almost entirely dispensing with dialogue in favour of Mahler, his favourite composer; whose name he had co-opted for the young officer in Senso (who had been called Remigio Ruz in Camillo Boito’s original novella). Richard Chatten.