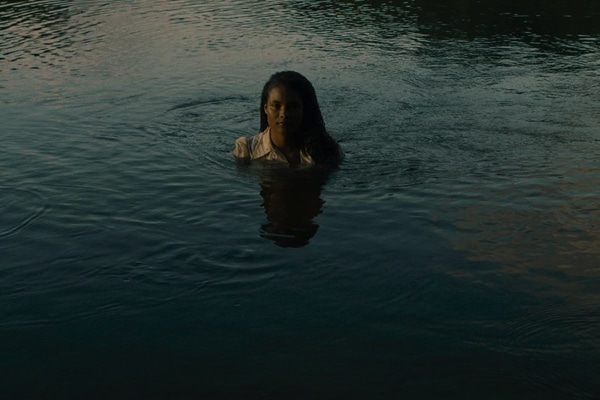 Mexico’s Yulene Olaizola delves into her homeland’s mystical culture in this eerily suggestive fantasy drama set deep in the Mayan jungle on the border between Mexico and Belize in 192o, a lawless territory where myths abound.

Suffused with cool lime greens of the lush rain forests this is a mediative feature that vibrates with the ancient lores of its remote and hostile territory, ambient sounds of wildlife occasionally breaking through the barrier of silence. Into this peacefully balanced ecosystem comes an unwelcome intrusion in the shape of a group of Mexican gum workers who cross paths with an enigmatic young Belizean woman dressed in white wandering around in the wilderness seemingly on her own. The jungle assumes a dominant role of antihero taking its revenge on the men its  poisonous plants, swarms of mosquitos, fierce animals fighting back as they desperately try to master its unknown depths and exotic creatures with their weapons and wilful presence.

Meanwhile Agnes is carried off by the men who take her with them as a lowkey hostage causing deep tensions in the group and arousing their fantasies and desires. Filled with new vigour, they must face their destiny, without realising that they have taken captive the legendary spirit of Xtabay, a powerful feminine spirit who beguiles them life a succubus leading them to their fate.

Selva Tragica serves as an intriguing metaphor for our ongoing destruction of the planet. Olaisola meanwhile offers up another fascinating and impressively crafted foray into Latin American culture that is currently enriching the independent arthouse film scene today. MT