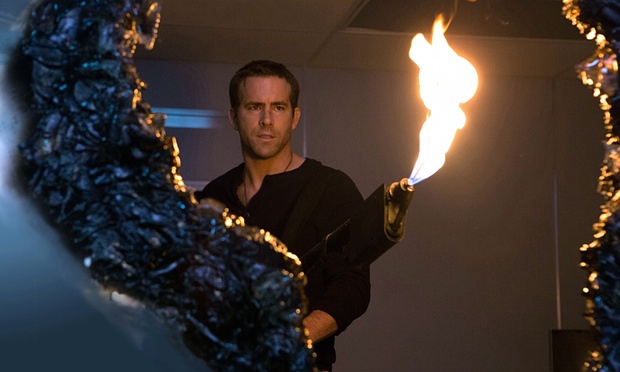 SELF/LESS imagines a future where brilliant minds can prolong their lives by re-incarnation using bodies grown in a laboratory. Or at least that’s what we’re led to believe in Tarsem Singh’s remake of John Frankenheimer’s vastly superior 1966 outing, SECONDS. Ben Kingsley is masterful as Damian Hale, a trumped up but simpatico Donald Trump-style mogul who lives in a gilded penthouse but is unable to vanquish cancer.

Under the auspices of a crisp-vowelled Matthew Goode, as psycho-scientist Professor Albright, Hale undergoes a risky procedure and is beamed up as Ryan Reynolds’ dishy dime a dozen denizen of middle America – a young Damian in a muscly new physique. Whisked away to New Orleans with a cache of pills to keep his new persona intact, he soon starts living the high-life in a chic townhouse in the French quarter where he beds young babes and mingles with the locals. So where’s the glitch? It soon transpires that his brand new body was donated to science by Mark, a man with a wife and daughter who needed expensive medical care. When the new Damian forgets to takes his pills, memories of this former life come flooding back.

So far so good, but when did Ryan Reynolds look anything like Ben Kingsley? Reynolds does his best as the new man – easy on the eye and appealing in a part that stretches the imagination to the limits, even if we suspend our disbelief – but this promising drama gradually morphs into a misguided mêlée of tedious punch-ups, car chases and shoot-outs as the new Damian attempts to extract truth from trickery. Why? Apart from an inept script (from Spanish brothers Alex and David Pastor), this Sci-fi conconction is impressively-mounted and rhythmically scored by Tarsem Singh who once made REM’s ‘Losing My Religion’. Here he demonstrates his inability to make a film that’s as engaging and intelligent as it is good-looking, despite a dynamite cast.

SELF/LESS loses its way after the first 40 minutes and takes another hour to reach a schematic finale. A decent idea gets lost somewhere in between. Like Damian Hale, sometimes the original is better than the re-make. MT