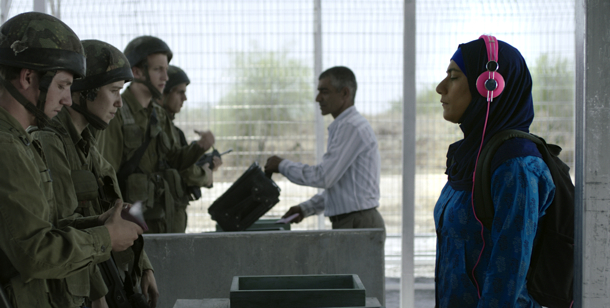 Director Shira Geffen won the ‘Palme d’Or’ in 2007 in Cannes for Jellyfish. Here she uses absurdist comedy to deliver another provocative comment on the Israeli/Palestine conflict. In Jerusalem a conceptual artist is thrown out of bed with a bang. We naturally suspect a bomb attack, but the answer is much more simple: Mihal is the victim of a collapsing bed, leaving her with a bruise on the head and a rapidly diminishing memory. She forgets her husband’s trip to Stockholm and an interview with a German TV crew. Having ordered a new bed at an IKEA-clone shop, Mihal, complaining (wrongly) about a missing screw for the bed, inadvertently causes Arab teenager Nadine (Samira Saraya) to lose her job in charge of packing screws at the furniture store.

Meanwhile Nadine is fighting for her right to wear jeans and pink earphones, whilst her traditional family simply wants to marry her off. Since Mihal is a VIP, she not only gets a new bed, but some freebies in compensation – one of them being a playpen, which is ironic, since she’s had her uterus removed and made into a purse for a an exhibition at Venice Biennale. In the confusion that follows the two girls swop roles and assume each other’s identity and when Mihal tries to cross the border she gets arrested at the checkpoint between Israel and Palestine. Here the narrative descends into a ridiculous farce where anything can happen: Mihal is mistaken for Nadine, and after the identity switchover, Mihal is fitted out as a living bomb to cause havoc in Israel, whilst Nadine has to face the irate German TV crew. And so confusion reigns in a region where Arabs have to queue for hours at checkpoints between the two countries, just to do a day’s work in Israel.

Geffen delivers and clever and convincing drama full of contradiction, acerbic humour and convincing performances from Adler and Saraya. Mihal’s frustration in trying to assemble her ‘IKEA’ bed will strike a sympathetic cord with audiences everywhere in this is a well-craafted sociopolitical story from the much troubled Middle East. AS