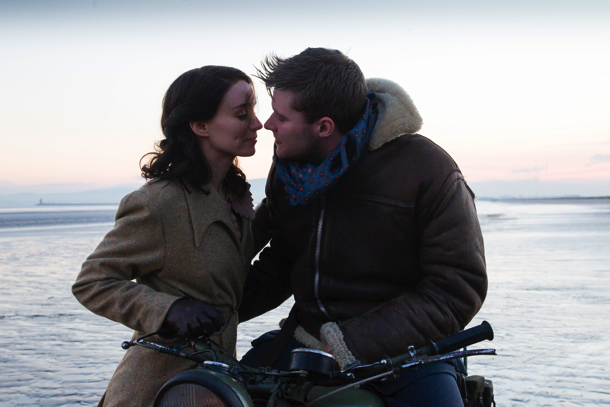 After some Hollywood mediocrities such as Brothers, director|co-writer Jim Sheridan has tried to recapture his breakout success with My Left Foot by adapting Sebastian Barry’s artful novel The Secret Scriptures. The result is an uneven and often bewildering melodrama, but a moving one that is certainly worth seeing.

Set in the early 1940s and at the end of the 1990s, the drama tells the story of Roseanne McNulty who spent nearly all her adult life in a prisonlike psychiatric ward in Ireland where the film opens showing Vanessa Redgrave as an emotionally distraught elderly Roseanne whose future in the home is threatened due to plans for an upmarket Spa. In flashback the story retraces her young days in Sligo where Rooney Mara is captivating as the young Roseanne who clearly “has power over men”, as the town’s priest Father Gaunt (James), puts it. The Second World War has just started, with Southern Ireland staying neutral but actually supporting Nazi Germany in a clandestine way. Roseanne is marked by the priest as a ‘dangerous’ influence, and soon moved to a dilapidated cottage by her aunt, having worked in her shop and turned too many heads. After rescuing RAF pilot Jack McNulty (Reynor) on the beach one day, she hides him from the paramilitary forces acting on behalf of the Government. The two have a whirlwind affair and marry in haste, but McNulty is captured by his pursuers and executed. Roseanne, pregnant, is send to a horrific church institution for “fallen Women” and gives birth to a son. Learning that the nuns will take her child away and sell it to rich US-citizens, she flees with her baby into the sea.

The narrative is interlaced with Roseanne (Redgrave) telling her story to psychiatrist Dr. Grene (a thoughtfully appealing Eric Bana) and a sympathetic nurse (Lynch). Veering wildly between flash backs and Roseanne’s more contemporary narrative (including her diary, written into a bible), does not help the creation of a dramatic arc: it creates an episodic structure, which not only reduces the emotional impact but also skips over vital clues that muddle and fail to serve what could have been a spectacular denouement.

Whilst Mara, Redgrave and Bana are brilliantly believable, overcoming the shortcoming of Sheridan (both as director and co-writer), the rest of the ensemble is reduced to clichéd cardboard figures despite best efforts from Aidan Turner, Jack Reynor and a mesmerising Theo James as Father Gaunt. But ultimately it is the clumsily-handled finale that robs the film of the glory of its early scenes. Leviathan DoP Mikhail Krichman’s sumptuous camerawork and set pieces of the Irish countryside and interiors are really stunning in conjuring up the romantic past, and the miserably grim atmosphere in the hospital. But Jim Sheridan wastes all this for a sentimental TV melodrama retelling a story which has been told in a much better ways since the original true events. MT