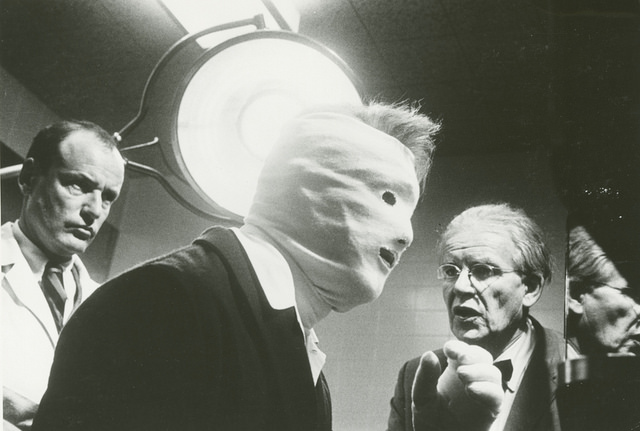 Seconds tick away in the hopelessly fragile, trivial life of an unhappy suburban middle-aged banker but when he agrees to an elaborate procedure that will fake his death and grant him a new life, there is naturally a price to pay. The title sequence alone to Sci-fi thriller SECONDS must have seemed highly original and unsettling at the time, with its eerie masks that were surely to influence Tobe Hooper in his Texas Chain Saw Massacre that was to follow eight years later. There is an febrile alienation to SECONDS’ opening scene where the camera tracks Arthur Hamilton’s sweating face as stares distractedly through the train window on his way home to Scarsdale station but when he arrives, his wife is there to meet him with her calming if rather formal banter about rose pruning and events of the previous evening. Later they are seen embracing in a way that acknowledges that strain and tedium has obliterated their physical relationship.

The third in John Frankenheimer’s unofficial “Paranoia Trilogy” after The Manchurian Candidate (1962) and Seven Days in May (1964), SECONDS (1966) is a subtle, unsettling ‘JG Ballardesque’ Sci-fi thriller that takes the paranoia-laden premise of the first two outings further to suggest that ultimately, the individual is his own worst enemy: or more explicitly: the ‘soul’ or ‘essential nature’ is an atavistic force that cannot be suppressed no matter how hard we try. So Nature will always triumph over Nurture.

After undergoing the procedure to become a “Second”, Hamilton turns into Tony Wilson (Rock Hudson) a younger, more vigorous (and let’s face it, a better looking) man who is given a new life as an artist in a hedonistic California beach community where he also has a butler (who sounds mysteriously like Joe Turkel in The Shining). But there’s something strange about this new neighbourhood and the reason is that all his local friends are also ‘seconds’. One of them, Nora Marcus (Salome Jens), has also left her unsatisfactory life (“I had a new house with a microwave oven”) until she left 4 years  to become a second.

Rock Hudson has hidden depths as Tony Wilson, a disappointed, tortured soul who doesn’t seem that delighted to have been reincarnated or to have met the exuberantly unhinged yet ravishingly attractive Nora, although after spending a day at a strange pagan-feeling wine festival during which ‘What Shall We Do with a Drunken Sailor’ is played in a minor key) the two become an item. But things take a sinister turn soon after when Tony’s mental state starts to unravel.

Celebrated cinematographer James Wong Howe’s camera angles, fragmented editing and Jerry Goldsmith’s sinister classical organ score is a enough to have you rushing to Harley Street for session on the couch with a…calming psychotherapist.