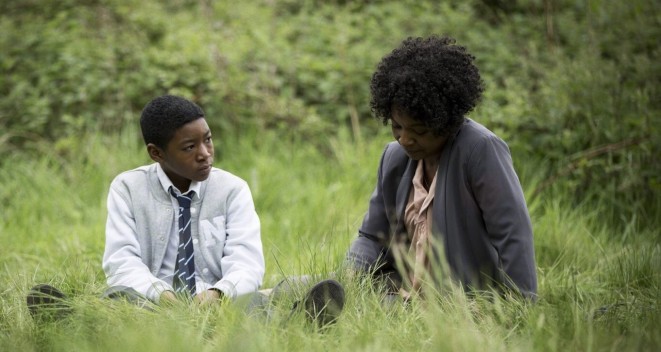 First time writer/director Debbie Tucker Green, a successful playwright and theatre director, is asking the audience for too much patience and a huge leap of face regarding the solution of this moody family drama, which is uneasy mix of social realism, psychological drama and biblical allegories.

It takes SECOND COMING a long while to tell us its secrets – for a long time we are puzzled about the numbers coming up on the screen, before we learn that Jackie (Marshall), who works in a social security benefit office, is pregnant and the countdown figures are the weeks left to full term. Jackie is married to Mark (Elba), a brooding railway maintenance worker; their son Jerome (Lewis) is eleven, and Jackie has been told after his birth, that she will not be able to have any more children. Jackie confides in a co-worker and, without mentioning the word, discusses an abortion, since she has not slept with her husband for a long time, and has no lover.  She than experiences hallucinations in the bathroom, involving nosebleeds. Finally, she confesses all to her husband and he takes it badly, making his son listen to his tirade. He drives his wife into a suicide attempt, but saves her life. On the first birthday of the child, we learn that it is indeed a ‘second coming’.

Whilst the scenes with the Jamaican families of the couple are very relevant and realistic, as is the trauma inflicted on Jerome by his parents (long shots of near-psychological torture), overall SECOND COMING lets us guess too much, and answers too little – particularly the ending forces us to make a huge leap of fate. One thought, that Jackie’s “visions” in the bathroom were psychotic episodes (that often occur in pregnancy), but a biblical explanation comes as a big surprise, considering the down to earth tone of the film.

The overall impression is a cryptic message, the dreamlike images are often elusive, the narrative opaque in the extreme. For example, when Jerome finds and tries to save an injured blackbird in the garden, we are reminded of the symbol of this bird in some cultures where it is a harbinger of major life changes. But again, we are left to wonder about the meaning which the film is unwilling to share. Marshall is the real star of the film, relegating Elba, despite of his physical dominance, to a clear second. She holds our interest in her sensibility with minimal but impressive gestures, as does Lewis, whose mature performance is simply marvellous. Luke Sutherland’s camera is tries to be inventive, but is too often simply pleasing, without helping the narrative along. SECOND COMING is a very ambitious failure, but a failure never the less. AS