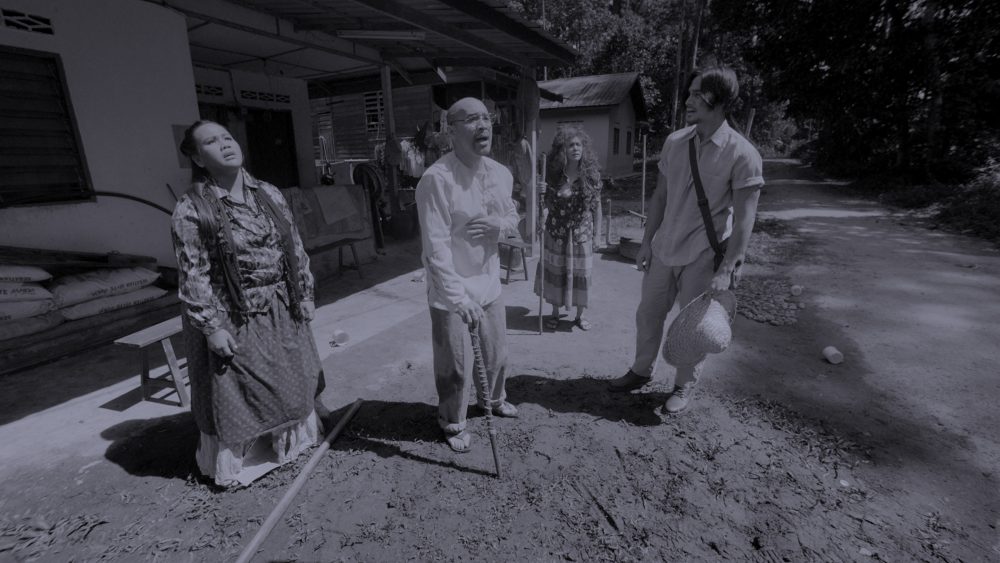 No director working today symbolises the face of contemporary auteur cinema quite like Lav Diaz, who wrote, directed, produced, composed and edited Season of the Devil, his third feature in twelve months and follow-up to Lullaby to a Sorrowful Mystery which was twice as long and took last year’s Silver Bear at Berlinale. The Woman who Left, went on to win the Golden Lion in Venice the previous year, in 2016.

Like his contemporary Bruno Dumont, (Jeannette: The Childhood of Joan of Arc), the radical Filipino indie filmmaker works as his own composer creating a subversive musical format for his chronicle of jungle warfare in the Philippines of the 197os. But his musical approach is Brecht, mixed with Démy, and overall, Season – at least in spirit – has much in common with Joshua Oppenheimer’s The Act of Killing. The musical style is disconcerting; the harmonies are repetitive and set to a recurrent chorus of ranting moans, aggression and desolation.

Filmed in Malaysia, Season of the Devil tells the story of rebel poet Hugo (Pascual) and his wife Lorena (Magdayao), a foreign doctor who, exasperated by the widespread suffering arising out of the decade-long civil war (brought about by President Ferdinand Marcos’ deployment of the Para-Military wing of his 70 000 strong Civilian Home Defence Forces), had left Hugo in order to help the community of Barrio Ginto, a small outback town where Marcos’ goons were running riot. Setting up a clinic, Lorena encounters Kwago (Amador), whose husband and son have been abducted and murdered. The village elder (Guingona) is powerless. He knows – along with the audience – that resistance is useless, after watching a couple of assassins on a motorbike gunning down a student and hanging a sign on him that says:” I am a rebel, don’t imitate me”. The military leader (Saracho) is supported by his second in-command, a lieutenant (Orencio) and the sinister Narciso (Domingo), a man with – literally – two faces, one of them representing Ferdinand Marcos. Narciso has the task of establishing a “new Church” on the island: but in reality he only recycles old lies of ghost and other superstitions. He blames the rebel forces for being in league with these apparitions, and holds them to account for the murder and violence committed by his functionaries. We only see these gangsters in a cohort; they are too cowardly to face the population on their own. The men rape and torture, and after a warning, they abduct Lorena. Her ordeal – not shown graphically – is a sad but masterful highpoint of Season. Hugo has gone mad after Lorena’s disappearance, and finally travels to Ginto, to learn about his wife’s fate.

Season of the Devil is a challenge to projectionists because of the unusual 1.50:1 aspect ratio: it is somewhere in the middle of 4:3 and 16:9, nearly like a 1:2. Visually, this is a startling film: DoP Larry Manda mixes the director’s trademarks of static shots, a shady monochrome palette, long shots and deep staging and live recoding on-set, with indoor shots, only lit by a single light source. Sometimes, protagonists “step out of the picture”, crossing the unmarked line, which is the demarcation in mainstream cinema.

Season of the Devil will stay with you for a long time. And so it should: current Filipino President Duterte, who had buried the body of President Marcos in the National Hero’s Cemetery, has unleashed a Para-military force Marcos would have been proud of. And, in 2016, after the killing and rape of Jacqueline Hamill, an Australian missionary in the town he was presiding over as mayor: he told supporters “Son of a bitch, she looked like an American actress. They lined up for her rape. Was I angry because she was raped? Yes, that’s one thing. But she was so beautiful. I think, the mayor should have been first”. And on 10..3.18, The Guardian reported that Duterte had put the name of Victoria Tauli-Corpuz, a UN Human Rights Investigator, on a list of “Maoist Rebels”, who are due to be hunted down by Duterte’s Special Forces. But do not fear, President Duterte has pity for female fighters: “We will not kill you. We will just shoot you in the vagina”.