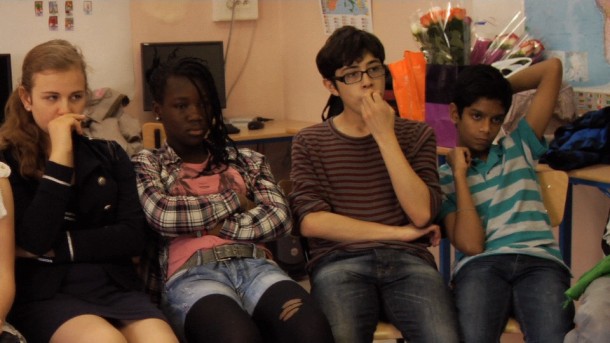 Julie Bertucelli (SINCE OTTO LEFT) has filmed students at the special reception class of “La Grange aux Belles” Secondary School in Paris’ 10eme arrondissement for one year. All of the eleven to fifteen year olds have one common denominator: they come from four continents and have to learn French, before they are transferred into the normal school system.

Taught by Brigitte Cervoni (her last class, before she will exchange the care for 24 students to oversee 300 teachers in the Ministry of Education), the students bring not only the fears and traumas acquired in their homelands with them, they are isolated in France, because they speak French poorly. On top of it, adolescence is never easy, particularly when some of the students have to be the interpreters for their parents. Considering all this, clashes with teachers are relatively rare, most of the students see France as a stepping stone to a prosperous life – they try, with exceptions, much harder than English children in Secondary Schools, who on the whole, rely very much on their parents bailing them out with private tutors.

Rama, who comes from Senegal, is one of the exceptions. The young girl is lazy and unmotivated, even though she was beaten by male family members at home. Her older cousin, who is looking after her in Paris, tells her in front of Cervoni, that she will be send back home, if she is not more compliant. But at the end of the school year, Rama blames racism (unjustly) for her poor results.

Religion and fear of the future plays a major part in the life of the students. They discuss their upbringing under different religions; one girl grew up in a home split between a Muslim father and a Christian mother. A young Serbian boy had to flee with his family, because Neo-Nazis persecuted them in his homeland. Overall, they question the usefulness of religion, even quoting the troubles in Ireland, where one of the boys suffered.

The class competed in a school film festival, and won second price at the Festival in Chartres. The unbridled joy showed is proof, what this medium can do for students having to express themselves in their second language. The last day at school is very emotionally charged, many of the students will move on into Secondary schools, others will remain. But together with their equally teary teacher, they can celebrate a first, giant step into integration. SCHOOL OF BABEL is informative and very moving, a testament to creative schooling.

On general release from 5 December 2014