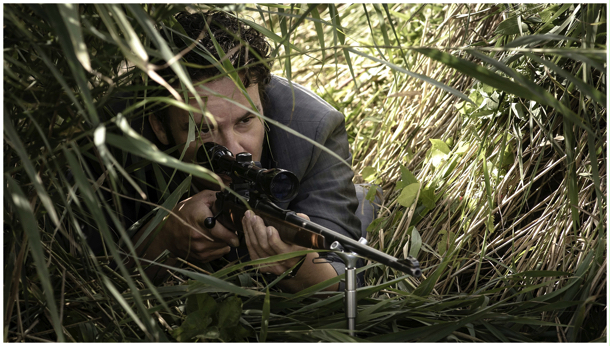 Alex van Warmerdam is a multi-talented Dutch filmmaker: he stars, directs and writes the music here in his follow-up to Borgman, another darkly comic piece, that despite its solid credentials is destined to be niche fare, rather like its predecessor.

Here a hunky contract killer Schneider (Dewispelaere) and perfect husband in his spare time, is hired to kill a raddled writer (van Warmerdam) and ‘child murderer’ (or that’s what he is told) who lives in a white-washed wetlands cabin with a view to die for. This is Holland where life is much more loosely buttoned up than in the rest of Europe. But even here things don’t go according to plan, as they rarely do where van Warmerdam is concerned. .

Schneider’s boss, Mertens (Gene Bervoets) has another sleek residence and issues orders that the murder has to happen that morning at the latest. Meanwhile, Bax has to get rid of his (much younger) babe to accommodate a visit from his depressed daughter Francisca (Maria Kraakman), so his agenda is rather tricky that morning. He’s also an addict: “I have my coke and weed, you have your muesli!” he tells Francisca, when she arrives like a doom bird. And it doesn’t get easier. One way or another, wires get crossed and gradually the body count starts to mount.

With its black sense of humour and loaded social comment (a la Borgman) this is a thickly-plotted and tightly wound farce that unfolds in the ‘Fens’ of Holland. Apart from the tricky plotlines, too many characters spoil what is essentially a visual delight with its darkly-brewed humour, and milky-cream interior sets. It doesn’t feel as prickly or as pertinent as Borgman, but there is plenty to sit back and enjoy, not least the perfect choreography and Schneider’s perfect shots – from his gun that is. The real cinematographer is Tom Erisman who creates a stylish aesthetic with his perfectly framed shots amongst the reeds and the pared-down architecture. An enjoyable, if bewildering watch. MT