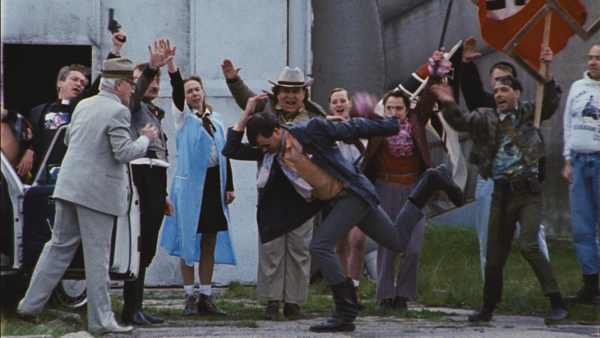 Christian Petzold’s longtime editor Bettina Böhler looks at the life of the controversial German filmmaker Christoph Schlingensief (1960-2010). His creative energy was certainly impressive: with twelve features and his his own TV Show, he also directed ‘Parsifal’ at Bayreuth and went on to garner a posthumous Golden Lion at the Venice Biennale 2010 for his German Pavilion – which had as its focus the church he served in as a teenage altar boy.

Böhler kicks off this colourful portrait with a foray into Schlingensief’s graphic design work. A blend of  astronomy, politics and psycho-therapy: it’s a very symbolic opening, trying to explain the Schlingensief’s urge to imbue his persona in everything. Although this is occasional relevant, it often took the focus away from the art itself; Schlingensief was never able to shake off his provocative identity as the’ Bogey-man of the Middle-classes’. His narcissism always taking centre stage, like it did in his TV Show ‘Talk 2000’, where he interrupted his guests to talk about his own personal problems.

After having been rejected twice by the Munich Film School, Schlingensief, like Fassbinder, chose the auto-didactic way of becoming a filmmaker. His debut “Die Kisten sind da (The Boxes have arrived) in 1984 got positive reviews. Using many of Fassbinder’s cast members, like Irm Herrmann and Udo Kier, Schlingensief’s German Trilogy of The Last Hours in the Führerbunker (1989), The German Chainsaw Massacre (1990) and Terror 2000 (1992), dealt with fascism and re-unification – in a provocative way, it showed West Germans greeting their eastern brothers and sisters with chainsaws. In The 120 Days of Bottrop (1997) he took a pop at Pasolini, with Helmut Berger starring in the ‘remake’ of The 120 Days of Salo.

In 2004 Schlingensief directed Wagner’s ‘Parsifal’ in Bayreuth, using experience he had gained from many theatres in the German speaking countries, including the “Schaubühne am Halleschen Tor’ in Berlin. His installations always drew the public’s attention, but he was creative impulse also had ballast: after his death, his widow Aino Laberenz followed up his plans to build an opera house; a theatre; a film school and an infirmary in Ouagodougou, capital of Burkina Faso, with the German government’s help. His “Cancer Diary” was a moving comment on his life, crammed full of achievements, and – again like Fassbinder – suspecting time was running out. Tilda Swinton and Austrian Nobel Price winner Elfriede Jelinek were amongst many mourning his death at the age of only forty-nine.

Böhler just manages to steer clear of a hagiographic approach, this is a comprehensive debut enlivened by some 8 mm films from Schlingensief’s youth – he started filming at the age of seven. She shows a little boy clamouring for attention in a petty-bourgeois Germany, which had not shed its fascist past, and later, was not ready for a re-unification. Schlingensief grew up in an environment where provocation the only route to attention. And he remained a prisoner of his childhood til the end. AS