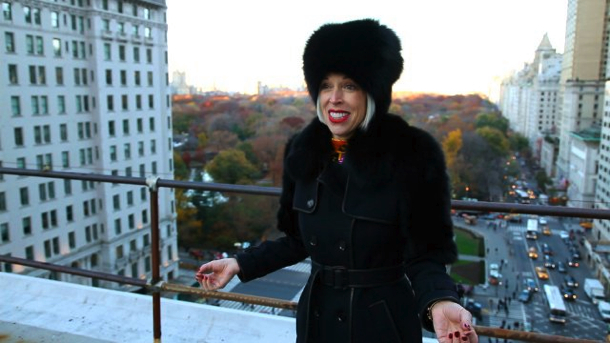 Documentaries about institutions of all kind – and the upmarket department store Bergdorf Goodman in New York is certainly that – tend usually to be sycophantic. But Matthew Miele’s SCATTER MY ASHES  has stepped over the demarcation line between document and commercial – clearly landing on the side of fawning admiration where any reality outside the store is ignored.

Senior staff are treated like gods; the filmmaker demurely listens to all the small talk and gossip about how fantastic life at B&G is, endlessly extolling its virtues without a scintilla of criticism to add texture is this picture-perfect paean to the department store where a pair of shoes costing a cool six thousand Dollars (the only price mentioned during the whole film.), is held up as a paragon of bare-faced profiteering. Oscar Wilde would turn in his grave uttering his well-worn dictum: “the price of everything a the value of nothing”.

History resolves around the store – not the other way around. With great sadness we are told that Jackie Kennedy bought a certain hat here, which she later wore to greet the masses on that fateful Dallas day in November 1963 (mercifully we are spared the shooting during this segment of archive footage recounting the event.).  And that’s the way history is made: Bergdorf Goodman placing itself right in the centre of the assassination drama, an example of product placement at its most ghoulish and opportunistic.

Needless to say, there is no downside to this story apart from the tragically amusing fact that, during the 2008 crash, even the clientele of this great shop were unable to afford its prices. So profits fell during the crisis, but then so did Walmart’s, because people could hardly afford a pint of milk: the doc would be hard-pressed to come up with a more insensitive social commentary on the World financial meltdown. But luckily for B&G, we learn that today’s profits have exceeded the pre-2008 level – “quiet an achievement”. Really?!

We also discover in this glitzy advert for the store, that shop window dressing is called ‘installation’ at B&G. David Hoey, who is in charge of the Christmas decorations in 2011, behaves like Cecil B de Mille the second. Yes, it looks nice, but please, the only reason is that you want to sell the over-priced stuff. But no, B&G is actually doing us all a favour, being so monumentally wonderful: it’s the public, the 95% who can only do “installation” shopping and the five percent who own the World and can afford to pay the inflated prices inside the store, who have to be grateful.

Joan Rivers nails it in one statement: “People who take fashion serious are idiots” – but it goes under in an endless display of vanity and pomp – the grimacing faces of most of the participants of this hideous carnival are testament to the ugliness of capitalism showcased here at its most rampant. AS

ON GENERAL RELEASE FROM 6 DECEMBER 2013