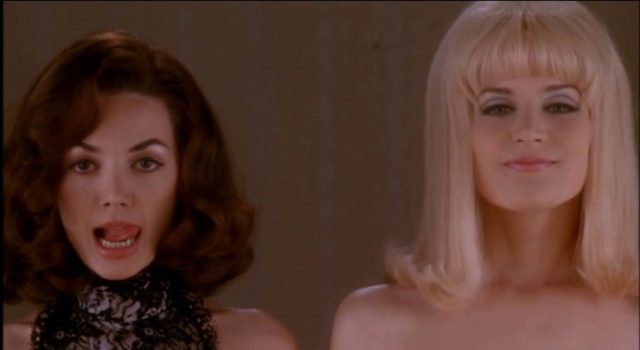 Michael Caton-Jones’ first feature is a sophisticated but fun-loving affair made just thirty years after the Profumo Scandal itself. It re-creates the Swinging Sixties with a well-paced script that puts the focus on the genuine and heartfelt friendship between Christine Keeler and Stephen Ward. Scandal also exudes the rather quaint buttoned up feel of London in the late 1950s with its sleazy underbelly and arrant racism (Ward refers to Lucky as a ‘lovesick jungle bunny). The period detail is strong but the performances make this head and shoulders about the others – it really is a fabulous cast: Joanne Whalley is a softer more kittenish Keeler than Sarah Cookson’s sultry hard-edged take. And John Hurt was such a complex actor and here he plays Stephen Ward  as raddled but genuinely likeable in his seedy vulnerability. He is a more appealing, less smarmy Ward than the BBC’s James Norton. And of course Bridget Fonda brings her elegance and Hollywood style to the party as Mandy Rice Davies. A shaven headed Ian McKellen is less appealing as Profumo, lacking a certain sardonic charm, but Leslie Philips has just the right shambling allure as Lord Astor. Jean Alexander is underused as Mrs Keeler and makes for a convincing even loveable working class woman of the era. Music by Carl Davis is sparing and effectively used in this enjoyable and illuminating trip down memory lane. MT

BLURAY/DVD RELEASE ON 24 FEBRUARY 2020 with SIMULTANEOUS release on BFI PLAYER, iTunes and Amazon