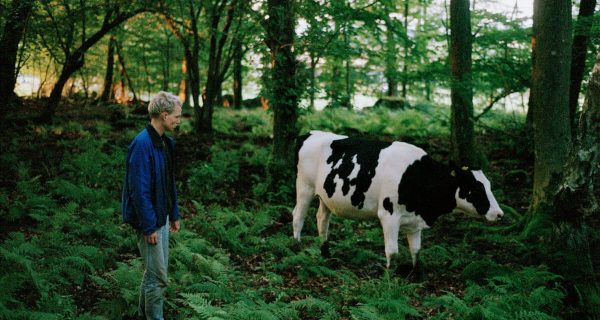 Swedish director John Skoog won this year’s CPH:DOX Award with the bewildering and visually sensational film. In some way Säsong (2019) or Ridge, is a broadening of his trilogy of shorts examining economic exploitation, starting in 2011 with Sent på Jorden; followed in 2013 by Förår and culminating with Reduit in 2014.

Best described as an ethnographical docu-drama Ridge is a love letter to Sweden’s agrarian past and the country’s deep connection to the land and nature. It prepares for the future with trepidation – Skoog’s camerawork pictures the mammoth farm machinery surging on the horizon at dawn like some great behemoth, as it cruelly savages the virgin swathes of corn, leaving a trail of destruction in its wake. Cows are silently harnessed to computerised milking machines sending their own gentle rhythms into disarray as stand isolated in vast soulless hangers. A few of them head for the woods, ‘demented’. Or, at least that is what we are led to believe in an opening anecdote in Skoog’s non-judgemental treatment. The burgeoning demands of the contemporary and future population are presented as a mute assault on the landscape and the Earth is crying.

Skoog celebrates Summer, and particularly MidSummer’s Day  – a big event in Sweden due to its dark winters, and a cause for much merriment and over-drinking in the verdant pastures of Skoog’s hometown of Kvidinge, a village in northern Scania County. Skoog abandons a traditional narrative opting for something more enigmatic and refreshing that forces the audience to speculate and scope out his motives and ideas – dialogue is minimal. The most loquacious segment sees a group of Polish workers, who have arrived by ferry for seasonal work, discussing how to approach Swedish women. “Not the romantic, moody Polish approach” one advises a younger member of the team.

Skoog works with family members and non-pro’s to create a portrait of a land that shares a common work ethic and where women and men are more or less equal. But there’s also a mystical remoteness and an unsettling undercurrent here in this distant rural corner. Often madness is more prevalent in the countryside, and there is certainly a human destructiveness at play here. But it is light-hearted and anarchic rather than sinister. The abstract juxtaposition of the scenes; a sunset played with an unsettling soundscape, can easily play havoc with our imagination, and our expectations. So Skoog appears to be having the last laugh here in an inventive and playful but ultimately deeply thoughtful film that resonates with the current zeitgeist on climate change and our deep connection with nature. MT