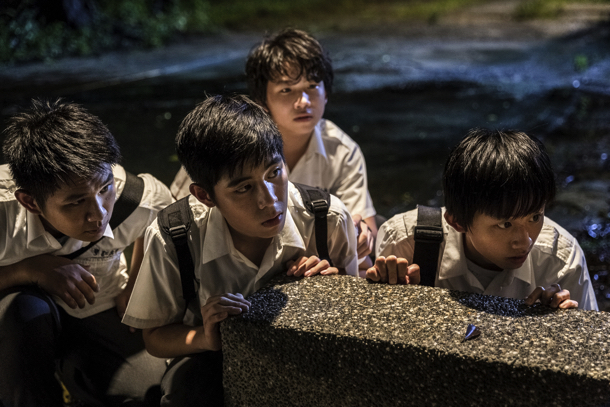 Meeting Dr. Sun is writer/director Yee Chih-yen’s first film in 12 twelve years, following Blue Gate Crossing which featured some of the same characters as his latest film. On the face of it Meeting Dr. Sun appears to be a surrealistic teen comedy but the real themes run much deeper. Two rival high school gangs are attempting to steal a statue of the founder of Modern China and use the money to pay off their outstanding school fees.

Sun Yat-sen (1866-1925) was the founder of the Chinese Republic in 1912. He was soon deposed as president by warlords, but later returned to politics and formed a coalition between his Kuomintang (KMT) party and the Chinese Communist Party in 1923. He is one of the few politicians admired by mainland China and Taiwan. Along with Mao Zedong and Chiang Kai-Shek, he was one of the most important figures in China from 1900 to 1976. Father of modern China (now Taiwan) espoused “Three Principles” – Nationalism, Democracy and Socialism which he developed whilst in exile in the UK.

Lefty (Huai-ting) is the gangling leader of a group of four students who have fallen behind with their school fees. He comes up with the plan to steal the massive stature of Dr. Sun which is stored away in the corner of the school. The group buys cheap masks so as not be recognised by the schools security cameras. But at the last minute Lefty finds a notebook outlining a plan to steal the statue in the same way he had planned. When Lefty meets Sky (Wei), the leader of the rival group, they compare notes on who is the least flush of the two. Sky than uses Lefty’s generosity to steal the statue with his four friends, but Lefty’s group appears just in time, wearing the same masks. This turns out to be helpful for both groups, since they need eight people to move the heavy statue. The delay alerts the caretaker and his girlfriend (Lee) who are suddenly surrounded by eight scarily masked men who chase them into a class room. Turning the situation to his advantage, the caretaker persuades his girl friend to make love, since “they may not survive the night”, as Lefty and Sky are the left fighting it out for the possession of the statue.

DOP Chen Tai-pu cinematography of the dark school and Taipei by night are highly imaginative, Meeting Dr. Sun plays out like a choreographed ballet performed in different shades of grey. What might seem like a prank, turns out to be a real fight for survival and the gang’s solidarity in the end is a metaphor for the student strike of March 2014 in Taipei. Dr. Sun’s statue represents the need for a social and democratic solution in Taiwan as well as in China. Meeting Dr. Sun is aesthetically a unique experience and when coupled with the political subtext, not easily accessible for European audiences, it becomes even more admirable. AS