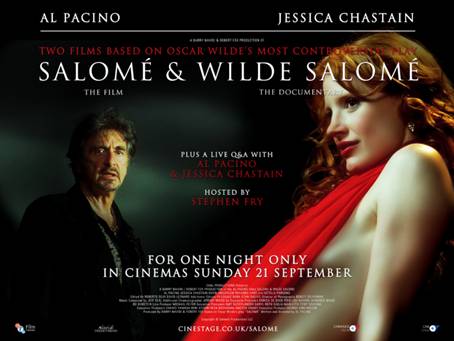 Al Pacino’s SALOME is a study in power play: Salome (Chastain), the stepdaughter of King Herodius (Pacino) and her mother Herodias (Hart) has to settle a score with both them. She wants emancipation from her overbearing mother, using her stepfather’s lust for her to divide them. Unfortunately, her true love, John the Baptist (Anderson) is also her victim. Refusing to kiss the princess, whom he calls a whore, she swears to make his lips touch hers. She uses Herodius’ infatuation with her to grant her a free wish, if she dances for him. The king is much too randy to refuse his stepdaughter anything, being a crass materialist himself, he thinks she will settle for half his kingdom. But after her beguiling dance she wants John’s head on a silver plate. Herodius is at first confused, offering Salome more and more – but she is adamant. When the king, desperate, finally gives in, she kisses John’s bloody head, and reminding him of her oath: “Thoust will kiss my lips”.

Pacino is his slimiest best, a real child molester – Salome was 15 – with no regard for her mother’s feelings. (The real Herodius was known as a mass murderer of his family and many rabbits). But the queen was not innocent herself: she had left Herodius’ brother to become queen. Salome is accustomed to power, but like King and Queen, not to love. John the Baptist is an idealist, quiet happy living in an underground dungeon, talking non-stop about the upcoming retributions for the royals. But he too does not know the real meaning of love – he just apostolates.

Wilde’s play is a narrative without pity and Pacino’s version follows this concept. The Greek chorus of the soldiers (one of them is in love with Salome, and kills himself when she wants to kiss John) acts like an echo chamber: distrust of their betters, mingled with fear, loyalty for a price. Jessica Chastain’s Salome glides like a snake through the film, using her physical charm, while keeping a cold heart. Pacino’s SALOME is the absence of any moral or ethical values, a very modern story indeed.

The lighting and the mobile camera are the dominant factors saving this production from being mere filmed theatre. Every main protagonist has their own colour: Herodius’ black/grey, Salome’s is an innocent pink and a bloody red. John has a shining silver aura in his dark prison. The soldiers are clad in a ghost like grey, corpses in waiting.

SALOME is intriguing because Pacino seems to follow no orthodox concept. He simply lets fly, creating a jungle of lust, power and death. AS