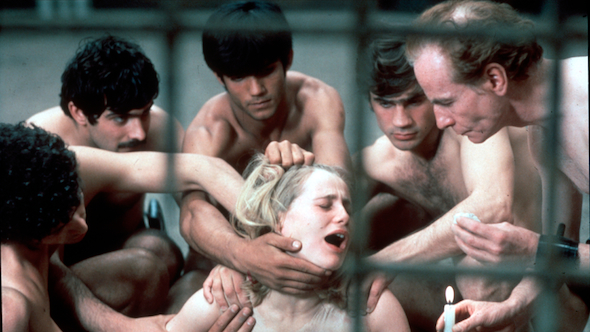 Banned, censored and reviled the world over since its release, Salò was Pasolini’s final and most controversial masterpiece. The content and imagery is extreme, retaining the power to shock, repel and distress. But it remains a cinematic milestone: culturally significant, politically vital and visually stunning.

Originally intended as the first part of a trilogy about death, it was actually Pier Paolo Pasolini’s swansong: it was premiered at the Paris Film Festival on 23rd November 1975, three weeks after his murder. Based on the novel The 120 Days of Sodom by the Marquis de Sade, it takes place in Northern Italian Fascist Republic of Salò (1943-1945), controlled by Mussolini with the support of Nazi Germany. It tells the story of the Libertines, who kidnap 18 teenagers and subject them to four months of violence, murder, sadism and sexual and psychological torture. Told in four segments ((Ante Inferno, Circle of Manias, Circle of Shit, Circle of Blood), all based on Dante’s The Divine Comedy. There are also quotes of Friedrich Nietzsche (On the Generality of Morality), the poem The Cantos by Ezra Pound and A la Recherche de Temps Perdu by Proust. Shot brilliantly by DoP Tonino Delli Colli and with a score by Ennio Morricone, the drama has moments of brilliance.

The public officials The Duke (Bonacelli), The Bishop (Cataldi), The Magistrate (Quintavalle) and the President (Valletti) decide to marry each other’s daughters: all four are raped and killed in the end. The victims are told “we will govern your life”. Heterosexual intercourse will be punished by mutilation and “the slightest religious act committed by anyone will be punished by death.” Most of the action takes place in a villa, including the coprophagic wedding banquet. Like a Greek chorus, four middle-aged prostitutes are commenting on the on-going bloodshed. The four men dictate everything, their slogans are actual fascist quotes or ones by de Sade. Death is the central topic, Pasolini claims that real and imagined death is connected, and that political and pornographic dehumanisation are the same kind of phantasy. Filmed with radical artificiality, on purpose Saló is very uncomfortable to watch. The Cubist art on the walls, the camp outfits, the sheer absurdity of certain scenes – especially the drag wedding – all make it impossible to reason with anything. The fascists laugh, but it is certainly not funny when they declare: “You cannot reason your way to an understanding of us or a prediction of what we will do next”.

The overriding impression of is of dread. The violent scenes are brief, but the torture that unfolding in the imagination is even more unbearable. The essence of torture is not violence or physical pain, but in the de-humanisation that takes place beforehand. Comparisons with Liliana Cavani’s The Night Porter and Joshua Oppenheimer’s The Act of Killing are clear.

Roland Barthes felt that Pasolini failed on both accounts with Salò: describing fascism and combining it with de Sade. “A flop of figuration (both of Sade and of the fascist system). That is why I wonder, if, at the end of a long concatenation of errors, Pasolini’s Salò is not, all things considered, a proper Sadean object: absolutely irredeemable: no one, indeed, so it seems, can redeem it.”

Surprisingly, most of crew and cast claimed to have enjoyed the shoot, despite the bruises and cuts they suffered. During the filming at the Villa Gonzaga-Zani in Villempunta, the Salò team where not far away from Bertolucci’s 1900 shoot, which provided the ideal opportunity for these directors to bury the hatchet on their long-standing disagreement that had started when Pasolini criticised Last Tango in Paris. AS

On 30 September 2019 the BFI will release Salò on Blu-ray utilising a High Definition master new to the UK. Special features for this release include a new commentary by Kat Ellinger.