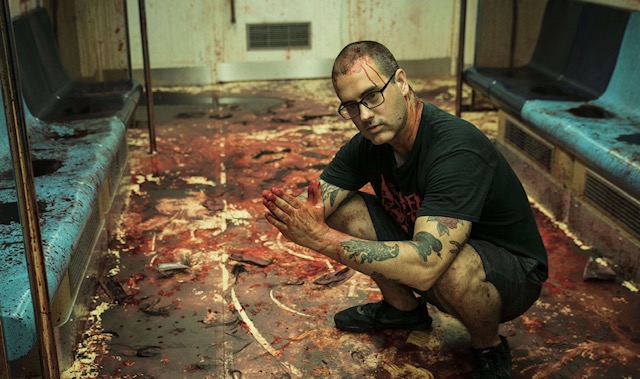 In his blood-strewn, scare-mongering first feature Rob Jabbaz imagines a hyper-violent-pandemic re-surging through an exhausted Taiwan as a couple try in vain to find other.

In Taipei, Kat (Lei) and Jim (Zhu) have fallen out over holiday plans to escape the first wave of viral mayhem. They desperately need time out when the Alvin virus is finally under control after a year when the effects on humans were relatively benign. But it’s election year, and the president has relaxed all precautions. The result is total chaos and the male population inexplicably lose their self control in a rampage of murder and rape.

In the tube on her way to work, Kat is accosted by a smart but infected business man (Wang) who morphs into a maniac, poking passenger Molly in the eye, Kat conveying her briskly to the NTU hospital, where the Casualty is predictably closed. Hot on their heels the business man manages to get hold of Molly while a doctor explains to Kat about a weird imbalance of the limbic system responsible for the outbreak of violence. Jim has also been assaulted by a neighbour and wonders whether he will survive the encounter without being infected.

Certainly one for horror fans, The Sadness delivers handsomely on the gore front with graphic images that leave nothing to the imagination. But cleverly Jabbaz always has a rationale at hand, suggesting that this brutality amongst the male population has just been dormant, waiting for the opportunity to erupt. A startling finale brings matters to a satisfying conclusion. Unbridled violence, then, but not of the mindless gratuitous kind. AS