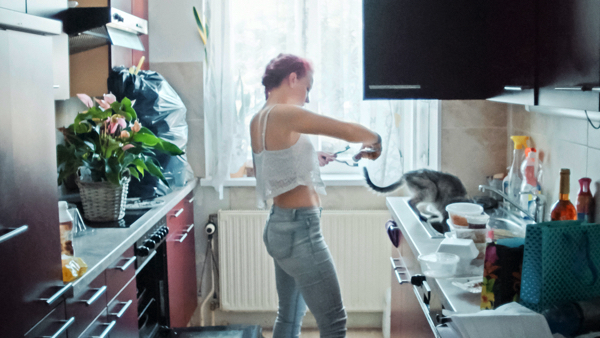 Video games and mobiles have had a corrosive effect on one Austrian family. Lisa Weber follows them as they struggle to make ends meet drowning in debt and an addiction to TV and computer devices which dictate the daily lives of this dysfunctional bunch.

Four years in the making the film centres around twenty-year old Claudia and her son Daniel (five), who live with Claudia’s mother Gabi and her brother Gerhard in a cramped Vienna apartment. Running on Empty is all about  over-whelming interdependence, the four characters have simply lost the plot and any kind of initiative, mentally or physically. Gerhard and Gabi are obese sofa-loungers who are either stuffing their faces with junk food, or burying them in their devices. Even the cat lolls around comotose.

Claudia has split with Marvin, Daniel’s father, who is looking for a flat for the family. Claudia has no secondary school certificate, having left school when pregnant with her son. They all live off welfare, fighting about the distribution of their spoils. Claudia is slim, and her brain is more lightweight, as she sinks in debt. When the siblings discuss emigration, Claudia questions why Muslims get a Christmas bonus when they don’t believe in God. Gerhard is a little more politic, not wanting a re-run of fascism. Hoping to celebrate his birthday in a posh restaurant, he is disgruntled about his mother and sister showing no inclination to finance it. The only car he will ever drive is the racing version on his console. Daniel’s fifth birthday ends with his parents having an row.

This is a torturous watch largely due to the family’s near catatonic way of life. Weber and DoP Carolina Steinbrecher are literally in the faces of their protagonists, who do not seem to mind: they are oblivious of anything and seem to spend their days sleeping or ‘chilling out’, a rolling camera doesn’t make any impact of their lack of decorum. Running on Empty is a decadent study of total stasis: A group of people who have given up on life, just vegetating along, letting the world go by, and they survive on state handouts. AS