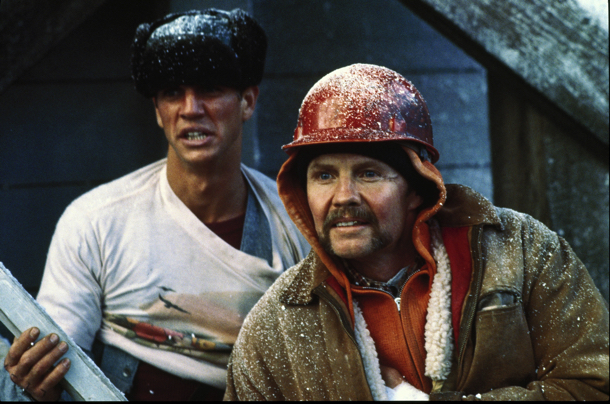 Produced by the (in)famous Israeli Golan/Globus production duo and their distribution arm Cannon Films, RUNAWAY TRAIN is one of the most international films ever made in Hollywood. The story itself was originally by Akira Kurosawa, the script trio of Djordje Milicevic, Paul Zindel and Edward Bunker kept very closely to the masters plans. Director Andrei Konchalovsky was the son of Sergey V. Mikhalkov (1913-2009), who, in 1942 got a phone call from Stalin, asking the popular children’s book author to write the text for the new Soviet anthem, composed by A. Alexandrov.

After spending ten years at the conservatoire, Konchalovsky, decided to became a filmmaker after a chance meeting with Tarkovsky (for whom he would later script Andrei Rublev). His debut film The First Teacher (1964) was praised, but as so often happened with the Soviet Censors, his second one was surpressed. After Sibiriada was awarded at Cannes in 1979, Konchalovsky emigrated to the USA, where he lived with Shirley MacLane before leaving her for Nastasja Kinski, who got him a contract with Cannon Film. Interestingly enough, Konchalovsky directed the Inner Circle in 1992, which tells the story of Stalin’s love for films and hatred for filmmakers, from the perspective of his private projectionist.

RUNAWAY TRAIN is told on three levels: There are the two prison escapees, Manny (John Voight) and Buck (Eric Roberts), who meet Sara (Rebecca De Mornay) on the train which, as the title suggests, runs into difficulties. A bickering dispatch team try to blame the accident on the computer system. And then there is Warden Barstow (Kyle Heffner, who is not much different from Manny – who was called a beast in prison – and joins the hunt in a helicopter, grimly determined to catch the criminals. The snowy, white desert of Alaska is perhaps the greatest star of RUNAWAY TRAIN: an eerie background to human story of delusion. The stunts were performed by the actors themselves, something which contributes very much to its success.

As Roger Ebert wrote after the premiere: “The ending of the movie is astonishing in its emotional impact. I will not describe it. All I will say is that Konchalovsky has found the perfect visual image to express the ideas in his film. Instead of a speech, we get a picture, and the picture says everything that needs to be said. Afterward, just as the screen goes dark, there are a couple of lines from Shakespeare that may resonate more deeply the more you think about the Voight character.” AS

NOW AVAILABLE ON BLU-RAY AT AMAZON